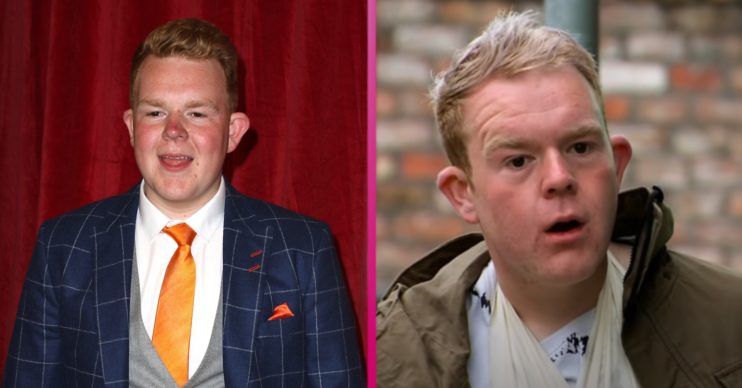 Colson has played Craig since 2011

Coronation Street star Colson Smith has given his fans a first look at his new weight-loss documentary.

The actor, known for playing Craig Tinker in the ITV soap, has released the trailer for his new documentary called Bored Of Being The Fat Kid.

In the trailer, Colson explains he’s never liked the way he looked.

He admits: “My character, Craig Tinker, is to undergo a transformation that’s going to change his life.

“Craig has decided that he’s bored of being the fat kid, but for that to happen, I have to do it too.

“So what I want to do is whilst you’re watching Craig lose weight on telly, I want to show you how Colson has done it in the real world.”

Colson recently explained that he sat down with Corrie boss Iain MacLeod to discuss what was next for his character.

As a result, they planned a storyline for Craig through 2020. But due to the pandemic, things were changed.

So what else has Colson said about the storyline?

Speaking to Entertainment Daily and other media, he said: “In October 2019, I sat down with Iain. We were chatting about story and possible directions we could take Craig.

But one thing that I learnt during in lockdown was actually this is far more important for Colson than it’s ever going to be for Craig.

“There were a few ideas bashed around. And I kind of said to Iain: ‘I’d quite like to lose weight, can we tie this in with Craig? I probably would want to do it on the major scale rather than the little scale, would this work for Craig? Is Craig allowed not to be the way that he looks.’

“And I got the green light from Iain and it all kind of tied in quiet nicely.

“Unfortunately lockdown happened, COVID happened and plans changed. But one thing that I learnt during in lockdown was actually this is far more important for Colson than it’s ever going to be for Craig.

“And yes Craig Tinker is probably the most important significant other in my life.

“But I kind of put myself first and thought this is going to be my opportunity to do something for myself.”

Colson thinks his weight loss has tied in nicely with Craig

“It’s tied in nicely with Craig – I know it was weird in lockdown because we went down to the three eps a week and we came back and I hadn’t had a haircut for four months so I did look very different.

“It fitted nicely with Craig. Personally I think it will show more to him as a character.

“He’s a lovable character, he’s a likeable character. We’ve kind of seen that with Faye that he’s gone back to the person he always use to like knock about with as a kid.

“So I think it’s going to do no end of good for Craig as a character going forward.”

‘Bored Of Being The Fat Kid will be released on Colson’s YouTube Channel on June 2 2021.

Coronation Street airs on Mondays and Wednesdays 7.30pm and 8.30pm. There is an hour-long episode at 7.30 on Fridays on ITV.

So will you be watching Colson’s documentary? Leave us a comment on our Facebook page @EntertainmentDailyFix and tell us.