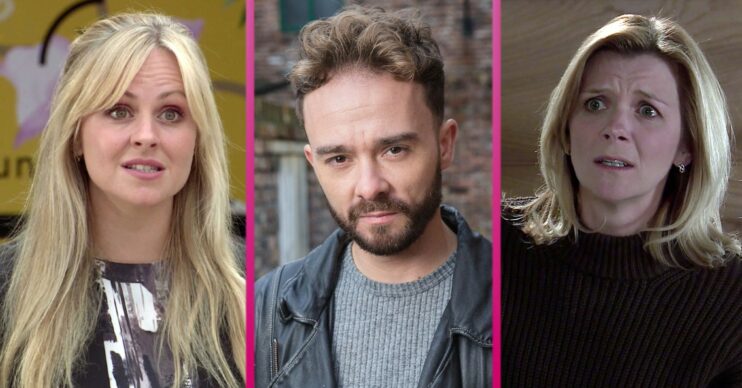 This lot should be ashamed of themselves

Coronation Street has many controversial characters – and a lot of them are out-and-out hypocrites.

You can barely chuck a cobble without hitting someone with a huge chip on their shoulder and a guilty conscience.

But who is the biggest hypocrite on Corrie?

Coronation Street characters who are hypocrites: Kevin over Abi

Love rats don’t come much bigger than Kevin Webster – but heaven forfend anyone cheat on him!

He romped behind wife Sally’s back while she battled cancer, knocked up teenager Molly behind her boyfriend Tyrone’s back – and let’s ignore Natalie from’t Rovers.

So imagine our endless surprise when Kevin was horrified that grief-stricken Abi would have slept with someone else.

At least she had a reason to be out of her right mind.

All Kevin needed was an empty bed.

So Max has spiked someone, stolen things, broken and entered and exposed someone’s past work as a prostitute, so what?

David Platt has tried to kill his brother, mother, the neighbours, his step-son and blackmailed Tracy Barlow into a sordid romp.

And that’s not the half of it. The hypocrisy is real ladies and gentlemen!

If there was ever a character who made terrible choices about men it’s Leanne Battersby.

And yet she still felt the need to judge her own sister for her terrible taste in men by deciding to get back with Imran.

I suppose we’ll just all forget how Leanne slept with Imran too.

She’s also forgiven cheaters and cheated quite a lot herself.

The factory manager was full of indignation about Gary killing Rick Neelan.

Never mind he did it to save her and her children’s lives – he killed someone and that is wrong.

Unless you’re Sarah, and then you have to not only kill them, but bury them under your mother’s bed in a new granny annexe in the converted garage.

And then frame your ex’s dead dad when the body’s found.