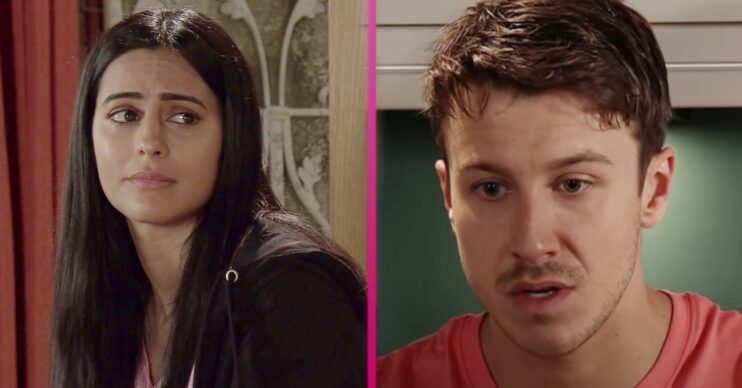 Coronation Street: Alya ‘is not so innocent’ fans claim as Ryan cheats with Daisy

Alya has cheated before

Coronation Street fans have clammed Alya Nazir after she broke up with Ryan Connor for kissing Daisy.

In last week’s episodes, Daisy made cocktails to try with Ryan and the two spent the evening together.

However the next day Ryan woke up in Daisy’s bed, unable to remember what happened. Daisy claimed she had no memory of what happened either.

Later in front of Alya, Daisy purposely said that she wasn’t happy about him lying to Alya when he ended up in her bed.

Having overheard, Alya ended her relationship with Ryan.

She later confronted Daisy who admitted she did remember what happened and Ryan had only kissed her.

However Alya stood by her decision and refused to forgive Ryan.

Later she threw him out of No.6, but fans have turned on Alya, reminding her she once cheated on her fiancé Gary with his friend Jason.

#Corrie Daft episodes tonight. And, though I'm on Alya's side (as I hate Daisy), isn't she being a tad hypocritical? Or am I misremembering Alya getting drunk and sleeping with Jason while engaged to Gary?

Alya's really NOT as innocent as she makes out…

When did Alya cheat on Gary?

In May 2015 Alya’s dad Kal died in a fire. Grieving for her dad, she got drunk and ended up sleeping with Jason.

She regretted it immediately after. Soon afterwards she got engaged to Gary, but when he discovered she cheated, they split up.

After Alya threw him put, Ryan has been staying at the Rovers on the sofa.

He told Daisy he landed a DJ gig in Val d’lsere and Daisy was quick to suggest she could go with him.

Will he decide to go with Daisy?