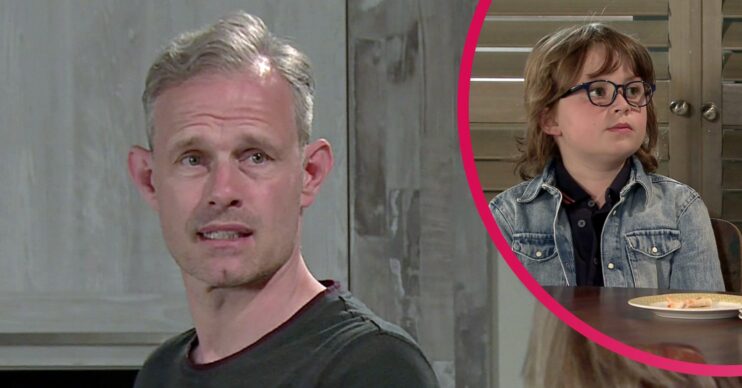 Nick is worried about something happening to Sam

Natasha stopped seeing Nick from seeing Sam after he returned home as they believed Harvey’s drug gang was after them and Sam could be in danger.

However after Leanne had some words with Natasha, she agreed to let Nick see his son again.

In next week’s scenes Natasha asks Nick if he and Leanne can have Sam for the week. Nick is thrilled.

As Sam scampers off to the bedroom to put up his astronomy posters, Nick lovingly watches him go.

Having shown Leanne the posters in Oliver’s bedroom, Sam is worried that he’s upset her.

Nick suggests they take them down.

Later Leanne tells Sam to put his posters back up on the wall as Oliver’s old bedroom is now his and she wants him to feel at home.

Later Sam and Nick come back from the park. A stressed Nick shows Leanne a graze on Sam’s knee.

Leanne says he should stop mollycoddling his son.

Sam wanders onto the balcony with his headphones clamped to his ears. Thinking Sam is missing, a frantic Nick heads out to search for him.

Will they realise what’s going on?

Nick makes a plan for Leanne

Later Nick surprised Leanne with a night at a posh hotel, determined they should send more time together.