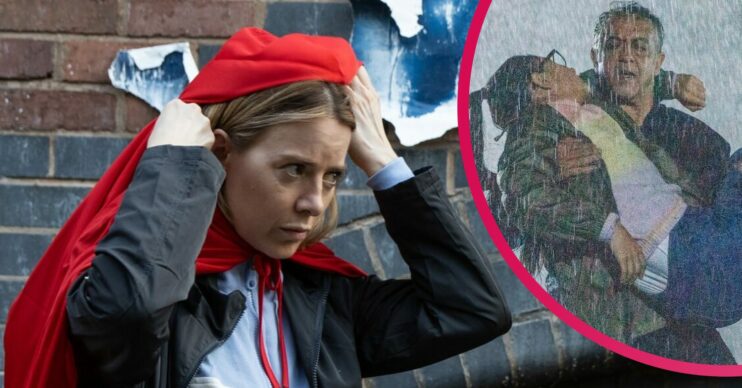 Some things on Corrie's big week aren't adding up...

There was drama as the Platts’ sink hole began to open up further.

Meanwhile Harvey escaped from prison, the Alahans were involved in a horror car crash, and Abi Franklin went after Corey Brent with a gun.

However fans have been left questioning some parts of the storyline.

A massive part of the storyline is that Debbie is throwing a Halloween themed event for the Bistro called Horrornation Street.

Fans pointed out it seemed odd for Debbie to throw the event almost two weeks before Halloween.

It was as if Debbie's explanation was added later to rectify the fact that they messed up and put on the Halloween special one week prematurely.

And why is it Halloween on 18th October?!

why was Halloween on 18th Oct though?

Although it was explained Debbie would be throwing the event up until Halloween, fans noticed another issue.

Over the last few weeks, Sally and Maria have been fighting the council to make the street resident parking only, as too many people are parking in the area to use the tram station.

However one fan pointed out there’s suddenly enough room on the street for a whole Halloween event with a beer tent, DJ and haunted house.

Confused. Last week they couldn’t move for cars on #corrie street, now they’ve got a massive tent with lots of rooms, a dance floor and a bar. Which part of the street is it on?

2. The growing sinkhole in Coronation Street

The sinkhole opened up in the Platts’ garden in September last year.

It was caused by Ray Crosby who then wanted to buy the property off David so he could demolish it.

However the sinkhole has been there for well over a year and it’s baffling that David and Gail never got it fixed.

Of course, it’s not a cheap job, but David has two children and Sarah is always going over with her little boy, Harry.

From a logical point of view, the sinkhole would’ve been fixed a long time ago.

Also, it’s been there for over a year. If it was going to start expanding, surely it would have started doing that along time ago.

We would like to add that Corrie producer Iain MacLeod has explained that due to COVID restrictions they weren’t able to do what they wanted with the sinkhole for the 60th anniversary, which was in December last year.

However Iain still had a plan for it and didn’t want it to be filled in.

So from a production point of view it makes sense, just not so much from a logical one.

3. The sinkhole refuses to swallow buildings

The sinkhole has also refused to take in any buildings.

As we know the sinkhole opened in the Platts’ garden. However in last night’s scenes, random bits of the ground around the street began caving in.

We saw Corey and Abi swallowed by the ground in the haunted house.

However it seems odd that the sinkhole is opening in random parts of the street.

4. Why was Dev so slow to save his kids in Coronation Street?

Coming away from the sinkhole drama, Dev, Aadi and Asha set off to go on holiday.

However they ended up bursting a couple of tyres on the road and needing to call Kevin for help.

Meanwhile, villain Harvey hijacked the prison van and it ended up crashing into Dev’s car.

Asha was unconscious in the back, however Aadi quickly came to, but his leg was stuck.

Dev went to save Asha first and told Aadi to “help himself.”

However fans were pointing out that Dev was slow when getting Asha out of the car, and when she was safe, he walked back to the car equally as slowly to try and save Aadi.

@itvcorrie Dev has annoyed me. There was no feel in that performance. Youd have adrenaline kicking in you'd be going a lot quicker to try get your kids out and to safety even if you were hurt. Thats adrenaline. It's frustrating that acting #SorryNotSorry #Corrie #coronationstreet

Dev just stood there when the car blew up with his son inside. No screams?!#Corrie

Abi wants revenge on Corey Brent – the boy who murdered her son Seb.

In last night’s scenes, Abi went to Corey’s house to shoot him but she was thrown when the police turned up.

Later, she knew he was at the Horrornation Street event and went after him.

However her costume was Little Red Riding Hood. Would she not have worn something to cover her face, so when she went after Corey he wouldn’t realise it was her?