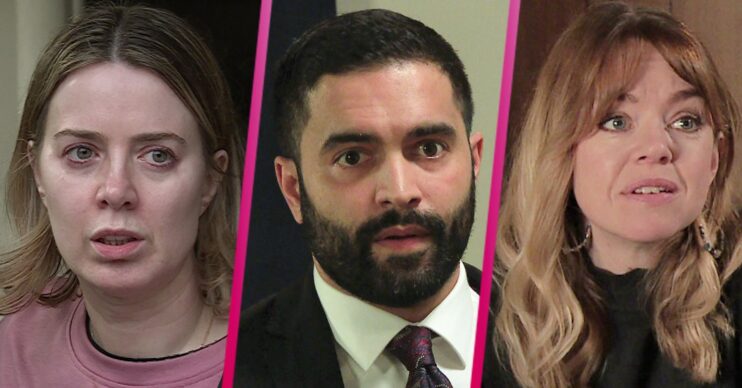 Abi and Imran were fighting for custody of Alfie

Coronation Street characters Abi, Imran and Toyah have found themselves involved in a huge custody battle for baby Alfie.

However there are several things about the storyline that just don’t add up.

Before everyone knew that Imran was Alfie’s biological father, Imran was helping Abi try to gain custody of their son and working as her solicitor.

However Imran taking on Abi’s case could be seen as a conflict of interest, and he feared if the truth came out he would lose his job.

Later Toyah learnt Imran was Alfie’s dad and she was devastated.

Toyah forgave Imran and they were both able to obtain custody of Alfie.

However it seems like Imran is still able to work as a solicitor. There didn’t even appear to be some sort of investigation.

Toyah forgiving Imran and marrying him

When Toyah discovered that Imran was Alfie’s father and he had cheated on her with Abi, she was devastated.

However she was very quick to forgive Imran and soon they began fighting for custody of Alfie.

It seems a bit bizarre that she forgave Imran for cheating and having a baby with someone else, especially when all she has ever wanted was a child of her own.

It’s a very hurtful thing Imran did and then to top if off, they got married just a few weeks later.

Imran and Toyah gaining custody of Alfie based on a lie

When Imran and Toyah began fighting for custody of Abi, Imran was convinced Abi was back on drugs.

He paid a man named Ben to follow her to try and get evidence.

Ben saw money being exchanged between Abi and her old friend Dean and got a photo, however as there were no drugs being exchanged, it couldn’t be used in court.

Imran then paid Ben to lie in court and tell the judge he saw Abi buy drugs.

Abi had been taking drugs test, proving she was now clean.

But the judge still granted custody of Alfie to Imran and Toyah, despite him giving no solid evidence of Abi’s drug use.

Before Alfie’s arrival, Toyah and Imran were foster parents.

They had taken in a few children and were foster parents to Kelly Neelan and little Elsie.

Toyah has been desperate to become a mother for years and has gone to some extreme lengths.

Back in 2018, Toyah was with Peter Barlow and they planned to have a baby via surrogate.

Unfortunately the surrogate had a miscarriage and Toyah failed to tell Peter this.

Meanwhile Eva Price found out she was pregnant with her ex, Aidan Connor’s baby – but feared he wouldn’t believe her as she had lied about being pregnant before.

Toyah and Eva struck up a deal where Eva would give birth secretly and Toyah would try and pass the baby off as her and Peter’s child.

This plan eventually fell through and Eva went to live in France with her daughter, Susie.

Of course it’s unfair to stop Toyah from being a foster parent based on a terrible decision she made out of desperation.

But now the court hasn’t even taken into account the extreme lengths that she and Imran are willing to go to to have a child.

She was placed with them for months while their other foster daughter, Kelly, was in prison.

When Kelly was released, she was unable to go back and live with Imran and Toyah as Elsie wasn’t able to live with other kids.

Toyah and Imran planned to adopt Elsie. However, when the truth came out about Imran being Alfie’s dad, Elsie was taken to another foster family.

This week, Imran and Toyah got a call from Elsie’s social worker saying things had been complicated with Elsie.

But now Imran and Toyah are married, social services asked if they still wanted to adopt the little girl.

The couple were thrilled and agreed to adopt Elsie, but what about baby Alfie? Can Elise live with another child now?

Perhaps there is a perfectly good explanation such as Elsie couldn’t live with older kids, but Corrie needs to clear this up.

We will just have to see how it all works out.

Read more: Coronation Street in 2022: Who’s leaving and who’s arriving in the village in 2022?