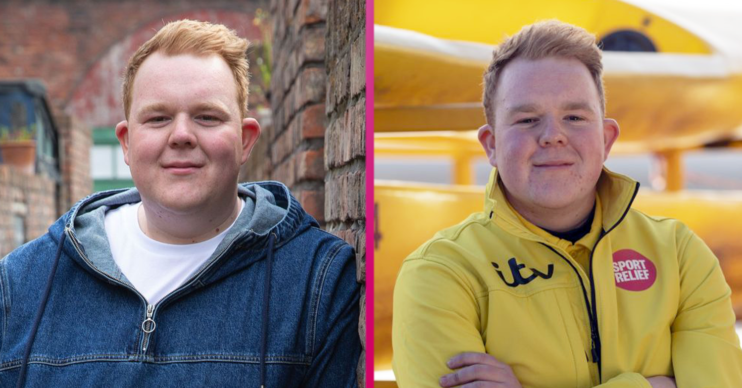 The soap actor, 21, has undergone an incredible weight loss transformation over the last year.

And the star, who plays Craig Tinker on the ITV soap, is showing no sign of slowing down.

Taking to social media, he showed off his slim and toned legs as he posed in his gym’s mirror.

He told his followers: “4 days back in the gym. Never appreciated a foam roller more.”

How has Colson Smith lost weight?

And it looks like Colson was straight back to the gym as soon as they reopened.

Read more: Piers Morgan confuses fans as he dines out with Joan Collins

Gyms in England only reopened on the July 25 after months of closure due to lockdown.

However, he certainly didn’t let the lack of gyms delay his progress.

Throughout lockdown he shared various home workout and run updates.

The star hasn’t said too much on what motivated his weight loss efforts.

He is estimated to have lost around 10 stone.

But he revealed on his podcast last December that a bout of food poisoning initially started it all off.

He co-hosts a podcast with his soap co-stars Jack P Shepherd and Ben Price.

One on episode he explained how a winter sun holiday quickly went very wrong after he ordered a dodgy seafood dish.

He said: “I was in Ko Lanta. I was sat on the beach and the waiter came over and was like, ‘What would you like?’ And I said, ‘I’ll have the prawns to start please.’

“I had avoided seafood [on Ben’s advice] but I was sat on the beach and I was like, ‘How can you not have seafood on the beach?’

“Well, anyway. I’m not doing that again. I’ve lost about a stone and a half. In seven days I’ve had one banana and three slices of toast. I’m on the mend now.”

He also said that Corrie would likely address his new look.

Speaking on Corrie’s Good News, he said: “Our make-up department at Corrie are fantastic.

“They are working really hard on joining the dots on the way people look before and after lockdown.

“For the more extreme cases, our scriptwriters are adding in bits to the script where people comment on other people’s new looks.”