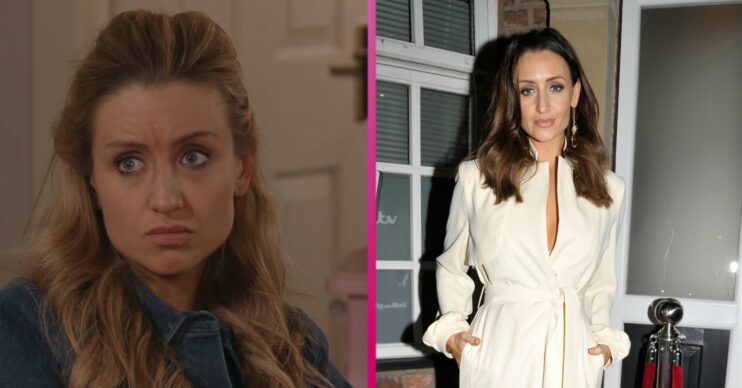 She was left in agony!

Coronation Street star Catherine Tyldesley has revealed she lost her eyebrows while starring in Holby City.

The Eva Price actress told how an accident in makeup saw her relieved of both her eyebrows and her eyelashes as she prepared for a scene in the medical drama.

Cath, 37, has appeared in several roles in Holby over her career.

But only once did they leave her traumatised and bald in the face.

Recalling her pain, she told Good Finds podcast: “My character had a head wound so they had to take a cast of my head.

“The poor girl, I think she was a trainee, was mortified.”

Catherine also revealed her wish to see Brookside revived – so she can star in it.

She added: “It was cracking. I would go on Brookside.”

Cath recently revealed she had been forced to turn down a return to Coronation Street.

Eva left Weatherfield nearly three years ago with her daughter Suzie to live in France.

Speaking to Digital Spy she said: “There was a storyline last year where Leanne’s little boy Oliver got very poorly and unfortunately died, and it made total sense for Eva to come back because why wouldn’t she?

“And they reached out to me, and it was so unfortunate that I’d already signed to do Viewpoint and the dates, we just couldn’t make it work.”

She added: “As a Corrie fan I felt like I’d let people down!

“Because really I’m not one of those actresses that will say ‘no I’m done with Corrie, I won’t go back’.

“I felt like they presented me with this storyline and I was like ‘Oh gosh yeah of course she’d be there, it’s her sister’.

“And I was just really gutted actually that we couldn’t make it work.”

Catherine then revealed that she would love to go back and that she loved working on the soap.