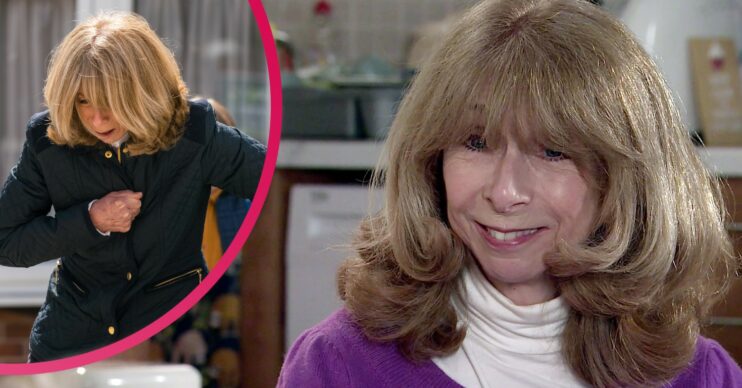 Gail ended up clutching her chest in pain

Coronation Street viewers were left baffled as Gail was admitted to hospital after having a heart attack.

However, Gail was becoming stressed and was adamant she needed to respect Natasha’s wishes.

Later, Nick told Sarah that he was going to sell his shares in the factory so he could spend more time with Leanne, which left her angry.

Meanwhile, David duped Gail into Sam and Nick meeting and soon another row broke out.

Stressed, Gail headed outside for some air. After that, Sam followed her outside and was concerned to find her clutching her chest in pain.

The young boy said he feared she was having a heart attack. Soon Gail was taken to hospital and her mum Audrey came to be with her.

Gail was told she had a suspected heart attack and that doctors were running tests on her.

However, fans were quick to point out that Gail wasn’t hooked up to a patient monitor and didn’t appear to be having her heart monitored.

#Corrie @itvcorrie Gail is having a suspected heart attack and yet she’s in a room on her own with no nurse and no heart monitor. Ridiculous

Why is Gail sitting in the hospital bed without being plugged into a bleeping machine? #Corrie #CoronationStreet

Afterwards, Gail revealed to Audrey that she wanted to leave Weatherfield.

In next week’s scenes Natasha and Sam call in at No.8 with a get well soon card for Gail.

When Gail reveals she’s leaving for Thailand the next day and doesn’t know when she’ll be back, Sam gets upset and rushes out.

Leanne calls at No.8 and begs Natasha to reconsider and let Nick be a part of Sam’s life for both of their sakes.

Natasha relents and tells Nick that he can see Sam. Audrey, Nick, David and Shona wave Gail off as she leaves for Thailand.

This week’s episodes of Corrie are on ITV Hub.

Will you be watching this week’s Coronation Street? Leave us a comment on our Facebook page @EntertainmentDailyFix and let us know what you think of these Corrie spoilers