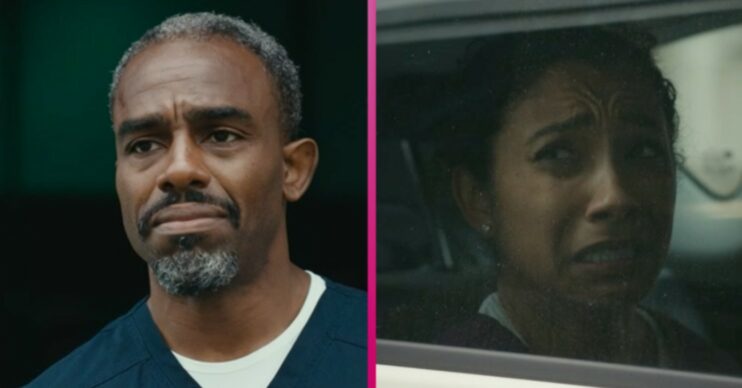 The abusive nurse has finally been exposed and stopped

Casualty fans have been left full of praise after Jacob’s abuser Tina was arrested.

The nurse returned last night (Saturday, October 9) in a last ditch attempt to manipulate Jacob into taking her back.

Tina took drastic and sickening action to get Jacob back – by locking a seriously ill patient in an ambulance.

She then lied she was pregnant with Jacob’s baby. In disturbing scenes she tried to manipulate Jacob into taking her back by threatening to put an air bubble into her arm to take her own life.

But when Iain arrived he called her out.

Read more: 5 Holby City characters who should move to Casualty

“Have you done manipulating him? Suicide’s not a game Tina. You haven’t got a clue what it’s like to feel like that.”

He was right – and Tina dropped her lies. She turned on Iain and attacked him, picking up a metal pole and beating him.

With her lies and abuse exposed, Tina was arrested and taken away.

Viewers were full of praise for the storyline.

One said: “Casualty deserves the highest of praise for highlighting that abuse has no gender. @Adele_JJames and @ChuckyVenn were both outstanding throughout this storyline.”

A second said: “I was screaming at my TV agreeing with Iain. Had me on the edge of my seat, but top class acting from all to highlight a storyline that needs to be talked about more. Well done all.”

A third said: “Both @ChuckyVenn and @Adele_JJames have both played their parts brilliantly.

“Hopefully Tina will get the help she needs and Jacob will get some support and help to help him come to terms with what has happened.

“Well done to all involved.”

Casualty star Adele James confirms she has quit the show

Actress Adele James confirmed she had left the show with a touching goodbye.

She said: “It has been such an incredible ride playing Tina.

“From that super sweet woman that you met just over a year ago to the Tina that we see today.

A goodbye message from Adele James.

If you have been affected by Jacob’s story, you can find help and support at https://t.co/bbDrmEgUhj pic.twitter.com/14f0lkDvi2

“It has been a challenge but one I have relished every moment of.

“Particularly because of the support, the compassion and understanding that you’ve all shown me across the year you’ve seen her play out on screen.”

She added: “It’s been the greatest honour of my career to tell this story and to play this character as hard as it might have been at times.

“And I’m so sorry for hurting your beloved Jacob. But he’s safe now.

“And I hope that to anybody who is experiencing coercive control or abuse at the hands of another person that you know that there is support out there for you too and there are ways to access help safely.

“I stand in solidarity with you and I’m so sorry this is your experience.

“Thank you so much for everything. I will miss you all so very much.”