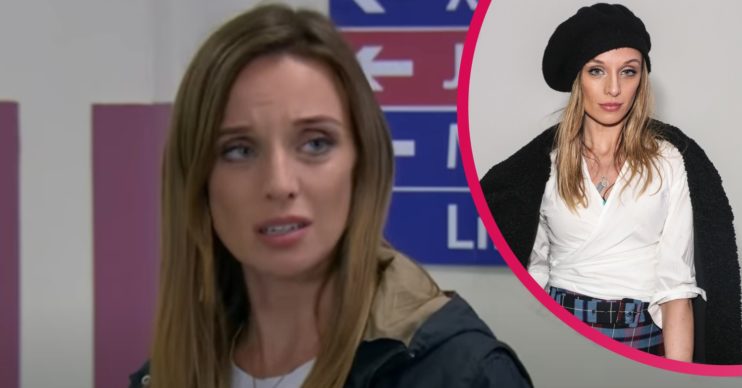 Andrea in Emmerdale: Who is she and who plays her?

Andrea Tate first appeared in Emmerdale in June 2019. But who is she?

In tonight’s episode of the ITV soap (Thursday, March 11) it became clear Andrea had eyes for vicar Charles.

But what do we know about Andrea? Who has she dated before and what happened between her and Jamie?

Andrea Tate in Emmerdale: Who are her family?

Andrea’s parents have never been mentioned. However it is known that she has a sister.

Whilst Andrea’s sister hasn’t been named and has never been seen on-screen, Andrea has gone to stay with her a couple of times since first arriving.

Read more: Who is Priya in Emmerdale and how many times has she been married?

Andrea also has a daughter called Millie with Jamie Tate.

She was married to Jamie, however they are currently in the process of getting a divorce.

Andrea Tate in Emmerdale: Who plays her?

In real life, Anna has a long-term partner named Daren. Together Anna and Daren have a daughter named Autumn.

Before landing the role of Andrea in Emmerdale, Anna made appearances in many other popular TV shows.

In 2009, she had a main role in Mouth to Mouth playing Meeshell Reeves.

She played Sigourney Newton in Doctors  in 2013 and the following year she played Olivia in My Mad Fat Diary.

She has also had roles in Ashes to Ashes, Casualty, Misfits, Silk and Age of the Living Dead.

How did Andrea and Jamie meet?

Jamie and Andrea met before moving to Emmerdale.

When Kim Tate went to prison in 2012, she tasked Graham Foster with look after him.

But when Graham was in a bad place, he hired Andrea, who was working as a barmaid in a pub he frequently visited, to look out for Jamie by getting close to him and asked she report back to him.

Eventually Andrea stopped reporting back, as it turned out she had genuinely fallen for Jamie.

In 2019, Jamie came back to Emmerdale and was later joined by Andrea and Millie.

Shortly after arriving in the village, Jamie discovered that Graham hired Andrea to keep an eye on him. Although he was upset, he did forgive her.

Why did Jamie and Andrea split?

After Millie had an accident and ended up in hospital Graham learnt her birth was nine months after he and Andrea had a one night stand in 2014.

Towards the end of 2019, Graham had a DNA test done which proved Jamie was Millie’s biological dad.

However Jamie was furious and broke up with Andrea.

Although he eventually forgave her and they got back together, he started an affair with Belle Dingle and broke up with Andrea when his cheating came to light.

But when Jamie ran over Moira Dingle, he went to Andrea and she began blackmailing him – either he got back with her or she would go to the police.

Eventually Belle tricked Jamie into revealing where he disposed of the car parts that tied him to the crime and she called the police.

But he pinned the crime on Belle and Jamie got Andrea to give him an alibi. Eventually Nate took the blame for the crime to prevent Belle from going to prison.

Nate was given a suspended sentence, however the Dingles and Tate family know Jamie was the one who ran over Moira.

Andrea eventually started to see Jamie’s true colours. But could she find new romance with Charles?