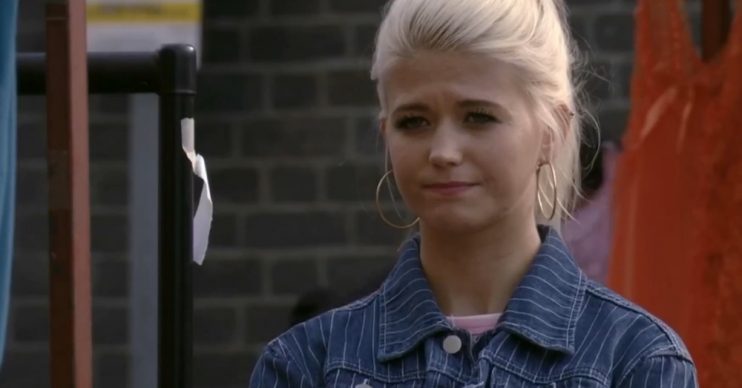 How can someone as street smart and sparky as Lola Pearce in EastEnders be related to Billy Mitchell? It’s one of Walford’s greatest mysteries.

Where Billy has proved himself to be everyone’s patsy, especially Phil’s, Lola is savvy beyond her years. Yet her genuine love for her hopeless grandad is one of her most endearing qualities.

Wonderfully played by Danielle Harold, EastEnders was a poorer place when Lola was written out in 2015. Not least because it robbed Jay Brown of his most promising relationship (sorry Abi).

Lola and daughter Lexi are a force to be reckoned with. And while Phil may be able to get Billy to do his bidding Ben Mitchell is sorely mistaken if he thinks the same is true of him and Lola.

When was Lola Pearce’s first appearance in EastEnders?

Lola first appeared on July 12, 2011 when Billy Mitchell and Julie Perkins (Cathy Murphy) came to visit her in care.

In one of EastEnders’ best introductions to a new character Billy came to the rescue of what he thought was his granddaughter only to find it was her attacker not the victim that was their little lost ray of sunshine.

Lola quickly got the measure of Julie (“She don’t say much does she”) and lifted Billy’s wallet when he gave her a hug.

She was quick-witted, mouthy, tactless, funny and full of heart. Both the best thing and the worst thing that Billy could have happen to him.

What age is Lola Pearce in EastEnders?

She’s had the odd memorable birthday. On her 16th she received an unusual present – community service and an ankle tag.

Lucy Beale RIP (Hetti Bywater) sacked Lola from her job at Ian’s chippy which she wasn’t about to take lying down.

Lola poured chip fat over the cars at the car lot. At first Lucy was the chief suspect but when she discovered the real culprit she called the police and Lola was nicked for vandalism.

Created by Jamie Oliver, it gave a group of 20 teenagers who all had less than five GCSEs each a chance to be taught by celebrities with specialist knowledge including actor Simon Callow.

Due to illness Danielle had missed most of her years 10 and 11 at school and left with only one GCSE. She described the show as life-changing.

After it she won a place at the National Youth Theatre and then auditioned for EastEnders.

Who is Lola Pearce’s dad in EastEnders?

Julie and Billy were both brought up in a children’s care home. Julie was raped by Henry Mason (Brian Hibbard) a paedophile who worked there.

The only time she had sex without contraception was with Billy. Baby Dave was taken away from Julie one week after his birth and put up for adoption.

Dave was never seen on screen but Lola didn’t give him a glowing reference when she talked about him to Julie and Billy.

“He ain’t worth crying over,” she told her grandmother. “He hated you, you know. I wouldn’t worry. He hated a lot of people. The Old Bill knew him better than I did.”

Where did Lola give birth to Lexi?

In McClunky’s, where else? And if that wasn’t dramatic enough it was recorded as part of an EastEnders’ live segment.

To tie in with London’s 2012 Olympics Billy Mitchell (Perry Fenwick) was tasked with carrying the Olympic torch then racing back to witness his great granddaughter’s birth.

It was touch and go with Jay and Cora Cross (Ann Mitchell) helping the delivery before Billy appeared in the nick of time.

“We did it, Pops. We did it,” cried Lola as the whole Square and cast crammed into the shop to congratulate Danielle just as much as Lola for pulling it off.

Who is Lexi’s dad in EastEnders?

There was a time when Ben wasn’t quite sure of his sexuality. Over a night of gaming Lola suggested to Ben that he might experiment.

“If you haven’t slept with any girls how do you know for sure you’re gay?” she asked. So they gave it a go and the result was Lexi.

Ben, like his own dad, is hardly the most loving and hands-on of fathers. When he brought Lola and Lexi back to Albert Square it was very much as an emotional bargaining chip to get to Phil.

But since their return Ben has softened at least where Lexi is concerned (except when he’s nursing a hangover). It’s a love that might yet prove his Achilles heel.

Read more: What will happen with Ben Mitchell and Callum Highway?

Who is Billy Mitchell’s daughter in EastEnders?

Janet is therefore Lola’s aunt. Janet was born in September 2006, the day before Billy and Honey got married and was initially called Petal.

She was diagnosed with Down syndrome soon after her birth. Honey found it hard to bond with her daughter at first.

After Billy and Honey split up Janet and their other child Will went to live with Honey and her new partner until he died in a car crash.

Lola first met Janet and Will in 2011. Janet ended up moving in with Billy, Lola and Lexi when Honey decided to start a new life in Canada in 2014.

At first she was going to take both Will and Janet until she saw how well Janet was doing with her dad.

What’s the history of Lola Pearce and Jay Brown in EastEnders?

Lola and Jay Brown didn’t actually get off to the best of starts. In fact she nearly killed him.

They had indulged in a bit of mild flirting but when Phil sacked Lola for stealing she trashed the Arches and knocked a large piece of machinery on to Jay.

A lock-in at The Vic moved things along even though Jay was seeing Abi Branning (Lorna Fitzgerald). Abi proved to be Lola’s main problem in the early days.

Giving up on Jay Lola started seeing Peter Beale (Ben Hardy) but he was always trying to turn her into something she wasn’t.

She should have properly got together with Jay after Lucy’s murder but Jay and Ben had actually mugged Lucy earlier on that fatal night.

A protective Billy shopped Jay to the police and Lola headed to Newcastle with Lexi to start a new life.

Since her return Lola did fail to tell Jay that she was actually engaged to a muppet called Ewan (Riley Jones). Ben and then Lola herself saw him off.

Jay and Lola finally got back together last year after he called things off with Ruby Allen.

But a bombshell pregnancy announcement is set to throw a spanner in the works.

Jay will propose to Lola, but whether she’ll say yes remains to be seen…

When did Lola Pearce return to EastEnders?

Lola returned to the show on 1 April 2019 with a new spex-free Ben and new Lexi.

The idea of Lola and Ben playing happy families didn’t last long. They had done a deal to come back and fleece Phil.

It didn’t take long though for Ben to click that Lola was also back to see if she could get together with his best mate Jay.

“So when are we gonna do it then? For real this time. Your face! Well? I won’t tell if you don’t. I’ve never known a bloke to turn it down when it’s given to him on a plate. Just let me know when, eh?” – Lola flusters Jay as he waits for Abi.

What’s your favourite Lola moment? Leave us a comment on our Facebook page @EntertainmentDailyFix and let us know!