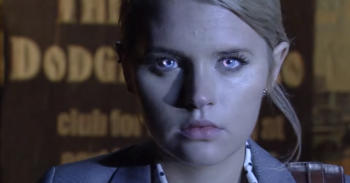 EastEnders viewers CONVINCED Lucy Beale isn’t dead and will be back next month!

They believe she will return soon

EastEnders viewers believe Lucy Beale will be returning to the soap this May.

Lucy, played by Hetti Bywater, was killed off in 2014 in one of the soaps biggest ‘whodunnit’ storylines.

Some 10 months after she was killed, it was revealed in a flashback that Lucy’s half-brother, 10-year-old Bobby, was the one who killed her by hitting her over the head with a jewellery box.

Although the character is dead, viewers believe she will return.

On a Digital Spy forum about Lucy, one user wrote: “Apparently she’s not really dead, is making a comeback in May.”

Another user joined in and wrote “Skipping through the Square with R&R, Danielle and Pat.”

Another user wrote in their own post: “I still think it was wrong to kill her off personally, same for Abi nR&R”

A fourth user branded her “brilliant” whilst others called the character “evil”.

Although his return hasn’t been confirmed, Bobby’s release date from prison was confirmed in the soap last month as 15th June 2019.

Bobby was played by Eliot Carrington but it has not been confirmed if the actor will return to play to the role.

After Bobby killed Lucy, his adoptive mum Jane moved Lucy’s body, which was then discovered by a little girl.

Bobby went on to attack Jane in 2016 by hitting her in the head and legs with a hockey stick. She nearly died as a result of her injuries.

Bobby pleaded guilty to the attack of Jane and unlawful killing of Lucy and was sentenced to three years in prison.