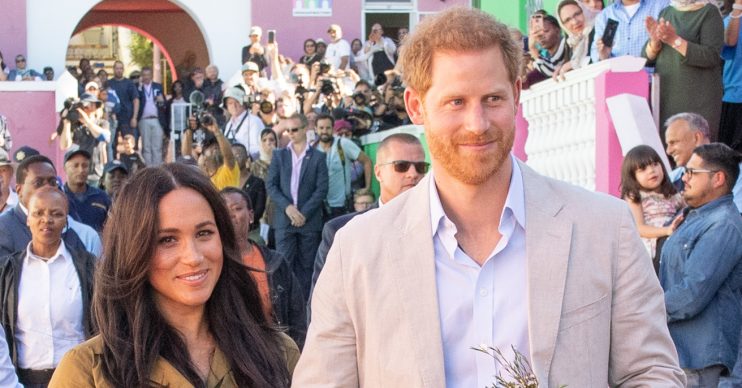 Do you feel sorry for the couple?

After they spoke about the immense pressure they are facing living their life in the public eye, should we feel sorry for the Duke and Duchess of Sussex?

Opening up in their ITV documentary, Harry & Meghan: An African Adventure, the prince spoke about the death of his mother, Diana, Princess of Wales.

“I will not be bullied into playing a game that killed my mother,” he told the cameras.

Meghan, meanwhile, opened up about her own struggles, admitting that she wasn’t “okay” and revealing that she had tried to develop a British “stiff upper lip” when it came to dealing with negative stories in the press.

Have the couple courted this attention?

Or are they just a young couple who are deeply in love and are doing all they can to enjoy life as new parents to baby Archie?

“Meghan was seen as trouble from a million miles away; shame Harry is thinking with something other than his brain. The sooner that gold-digging chancer is out of here the better. She’s nowhere near royal standard at all,” one social media user said.

Others sided with Good Morning Britain host Piers Morgan, after a debate on the breakfast TV show the following morning.

Meghan is incredible. No-one deserves this level of hate. She hasn’t killed anyone. She hasn’t harmed anyone. If you don’t like her, don’t look at what she’s doing.

Others called the duchess a “climber”, praised her acting skills and said she had “changed Harry for the worse”.

I tend to agree with mr Morgan.
Meghan has changed Harry for the worst..
All this is an Amercan style poor little me show. People forget this woman was a top scale actress pulling Harry’s strings.
Good performance though 👏

She needs to get real, does she know what existing is, because there are plenty of people in this world that do just that,she lives a privileged life, she’s now going to have six weeks off, then a lovely long Xmas..Harry has changed since he’s been with her..

She married into it knowing it wasn’t a soap opera. She is and always will be a thorn in Harry’s side. If THEY do not like being here then piss off. But do not expect people like me to rally behind you – and the question is, do you deserve a Royal wage!

No. Markle has always been a ‘climber’ and she’s now bagged herself ‘first prize’. She will wreck that poor lad in her pursuit of her ‘me, me, me’ agenda. I’m just glad that it is William who will take the throne, not Harry.

However, for every member of the public who had something negative to say about the couple, there were many who emphasised with them and said we should give them both a break.

Others said they were watching the documentary in tears.

Celebrities fight for prominence, recognition & power, as once did Meghan. Harry didn’t. He never had a choice.

Meghan quit acting, not public life, but the ceaseless intrusion & vile diatribe was not the deal. They are lovely. Let them be x

Pure sobbing for Meghan and Harry. The mental toll the press has had on them. It’s so clear on what horrible people are doing to them. They look so drained and worn out. Honestly just want to give them a huge hug and reassurance of love. #HarryandMeghan

Meghan is incredible. No-one deserves this level of hate. She hasn’t killed anyone. She hasn’t harmed anyone. If you don’t like her, don’t look at what she’s doing. Surely it’s that simple? #HarryAndMeghan

Others were full of praise for Meghan’s grace, poise and honesty.

If you don’t feel any sympathy for Meghan Markle after that interview, I suggest you go check if you still have a pulse.

It even baffles me, as a born and bred British man, that so many British people can be so unabashedly cruel and vindictive. #HarryandMeghan

I really find Meghan so breathtaking. She’s captivating, intelligent and so genuine. I think she’s doing a brilliant job at adapting to her new life and role #GirlCrush #HarryAndMeghan

While some said the love that the couple share is “so evident”.

Meghan and Harry 😍. They are so cute. Their love for eachother is so evident. It’s a treat to see them on the big screen#HarryAndMeghan pic.twitter.com/x72mEdLndO

What did you think of the documentary? Let us know on our Facebook page @EntertainmentDailyFix.