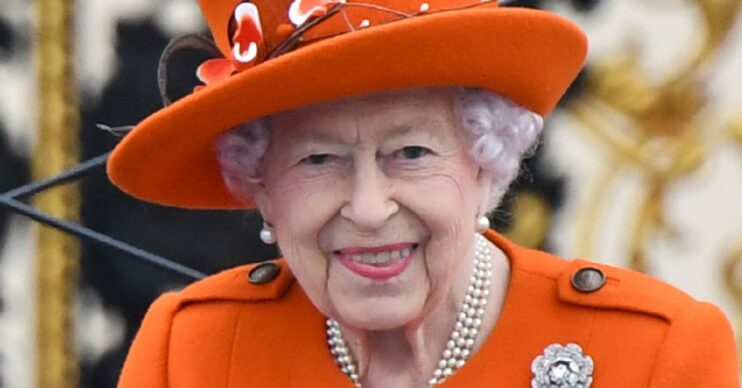 The Queen today (Thursday October 7) stunned royal fans by wearing a bold and delightful orange coat at an event at Buckingham Palace.

The monarch, 95, chose an outfit that helped to banish the grey autumn clouds and was very much on-trend colour-wise.

What did the Queen do at Buckingham Palace today?

Her Majesty hosted an event at the Palace with her youngest son, Prince Edward.

In fact, it was the first event to be held at Buckingham Palace since the Covid pandemic began.

The event was to launch the Queen’s Baton Relay for the 2022 Commonwealth Games, to be held in Birmingham.

Read more: The Queen fans gush over her ‘radiant’ appearance as she meets soldiers at Windsor Castle

The Queen placed a message inside a baton and handed it over to Paralympic gold medallist Kadeena Cox (who also recently won Celebrity MasterChef).

It was then passed on to other baton carriers down The Mall.

Overseeing the ceremony was the Queen and her son, Edward, Earl of Wessex.

Her Majesty stunned those present by wearing a brightly-coloured coat with matching hat, which featured a flower decoration.

On the coat, she wore a Nizam of Hyderabad Rose brooch and held a black handbag.

Her Majesty looked ‘radiant’ this week

Earlier this week, fans gushed over Her Majesty and her “radiant” appearance.

Queen Elizabeth was at Windsor Castle on Wednesday (October 6) to meet the Royal Regiment of Canadian Artillery.

Read more: The Queen publicly discusses Prince Philip for the first time since his death

Fans couldn’t wait to praise her on social media.

Once said: “I am loving these magnificent photos. Our beloved Queen looks radiant with a lovely smile.”

Another tweeted: “She looks so happy again.”