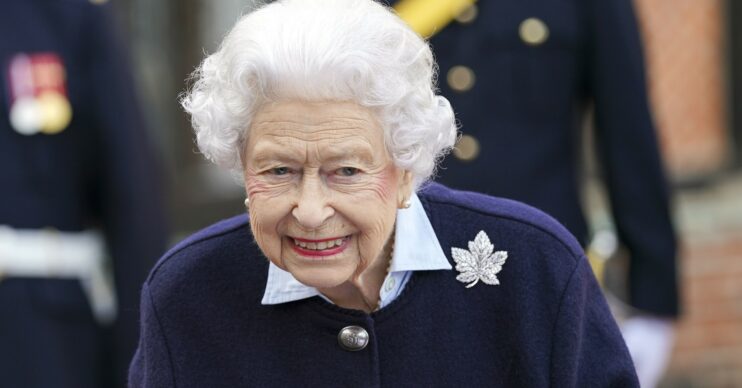 Her Majesty met with soldiers at Windsor Castle

The Queen has left royal fans gushing over her appearance as she stepped out to meet soldiers this week.

Her Majesty, 95, met the Royal Regiment of Canadian Artillery at the Guardroom at Windsor Castle on Wednesday.

During the engagement, the Queen was shown the guards’ accommodation and listened to the soldiers as they spoke about their homes and families in Canada.

Fans said the Monarch looked “radiant” in the images as she smiled while meeting the soldiers.

The Queen, who is Captain General of the Regiment, wore a navy wool coat with a shirt and tweed skirt underneath.

She also had her signature black handbag and sported the Canadian Maple Leaf brooch.

Read more: The Queen publicly discusses Prince Philip for the first time since his death

During the visit, the Queen also presented The Captain General’s Sword to representatives of the Regiment.

The Royal Family Twitter page says the sword will be awarded annually to an officer who has “demonstrated exemplary leadership”.

Royal fans loved seeing the Queen out and about, and couldn’t help but gush over her “radiant” appearance.

One person said: “I am loving these magnificent photos. Our beloved Queen looks radiant with a lovely smile.”

Another tweeted: “She looks so happy again.”

“She’s such an inspirational lady.”

Another gushed: “The Queen is glowing with pride as well as all the soldiers in her presence. Her smile is so lovely to see.”

Meanwhile, the Queen recently publicly spoke about her late husband Prince Philip for the first time since his death in April.

Philip and the Queen had been married for 73 years.

Read more: Prince Andrew ‘to be awarded with Platinum Jubilee medal from Queen’

Speaking at the official opening of the Scottish Parliament in Holyrood on October 2, the Queen said: “I have spoken before of my deep and abiding affection for this wonderful country and of the many happy memories Prince Philip and I always held of our time here.

“It is often said that it is the people that make a place. And there are few places where this is truer than in Scotland.

“As we have seen in recent times.”