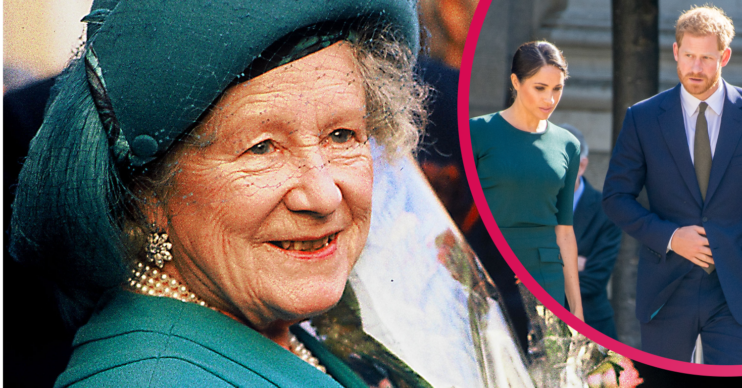 The Queen Mother “would be unforgiving” towards Prince Harry and Meghan Markle for giving up their duties and moving to America, a royal expert has claimed.

But, the expert also said that the Queen Mother “would’ve been proud’ of Prince William and the job he’s doing.

Royal expert Jennie Bond believes that the Queen Mother would be “unforgiving” towards Prince Harry and Meghan Markle – if she were still alive today.

As everyone knows, Harry and Meghan stepped back from royal duties in 2020, before moving to America. Since then, they have done the infamous Oprah interview, in which they revealed some shocking claims about the monarchy.

Speaking to OK! Magazine, Bond says that the Queen Mother, who died in 2002, wouldn’t be “having any of it”.

She said that Queen Elizabeth II‘s mother would draw parallels between Harry and Meghan to Edward VIII and Wallis Simpson.

In 1936, Edward VIII abdicated the throne after he wasn’t allowed to marry Simpson, an American divorcee.

His abdication led to George VI, the Queen Elizabeth’s husband, becoming king. This in turn led to where we are today, with Queen Elizabeth II on the throne.

‘Wallis Simpson all over again’

Bond went on to speak about how Queen Elizabeth would feel about the situation regarding the Sussexes.

“In the Queen Mother’s eyes they’d be opening up ancient wounds. She’d be unbending and unforgiving,” Bond said.

“Here’s another prince of royal blood being taken away by an American actress – I think that’s how she would see it. To her, it would’ve been Wallis Simpson all over again.”

However, despite not being happy with the situation, the Queen Mother rose to the challenge and helped serve the monarchy until her death.

Despite being disappointed with Harry, Bond believes that the Queen Mother would have been proud of his brother, Prince William.

“More than anyone, she’d be proud of William. I think he’s shaping up to be such a popular and modern future monarch,” she said.

Bond then went on to say that the Queen Mother was always proud of William’s father, Prince Charles.

She said that there was a lot of love between Charles and his grandmother back in the day.

It’s likely that Prince Harry’s absence from yesterday’s memorial service would have ruffled the late Queen Mother’s feathers too.

The Duke of Sussex was a notable absentee in a service that was even attended by the disgraced Prince Andrew.

The memorial service was held to commemorate the life and public work of the late Prince Philip, who died last year.