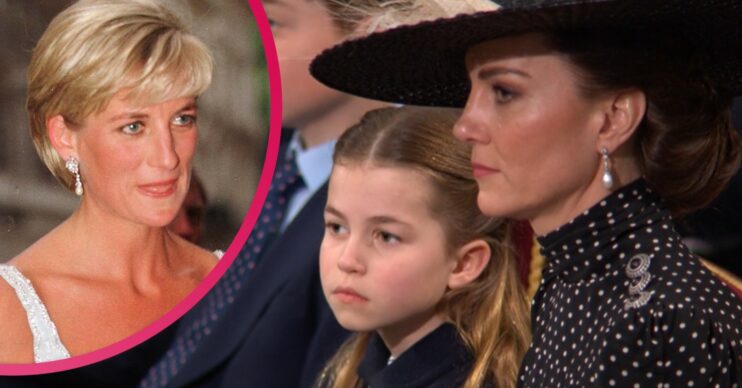 An adorable moment of Princess Charlotte at the Prince Philip memorial has left royal fans comparing her to Princess Diana.

The six-year-old royal attended the service at Westminster Abbey on Tuesday alongside brother Prince George and their parents, the Duke and Duchess of Cambridge.

However, viewers watching the service spotted a cute and funny moment from Charlotte.

As cameras zoomed in on George, Charlotte and mum Kate Middleton, Charlotte is seen pulling a face.

One royal watcher shared the moment on Twitter and joked: “The look when you see yourself on TV.”

The moment went down a treat with fans as many said her facial expressions mirrored that of her late grandmother, Princess Diana.

The look when you see yourself on TV. #PrincePhilip

One person said: “She channels the Princess Diana’s face expression and spontaneous smile.”

Another added a photo of Diana pulling the same face as they wrote: “Princess Charlotte be…”

One added: “Princess Charlotte is starting to look like Diana.”

Others speculated what Charlotte could have been pulling the face for.

One tweeted: “I think she had the hiccups and and was a bit embarrassed, she knew the cameras will notice. So funny.”

Another added: “I think it looks like she had a hiccup and then got a bit embarrassed.

“What a sweetheart. I just love their family.”

Meanwhile, others just gushed over the sweet moment.

One said: “Princess Charlotte is the cutest thing.”

Another added: “She was sooooooo well behaved today; what a credit to her parents.”

Such a sweet moment between Princess Charlotte and Princess Beatrice, just look at them 🥺❤️ pic.twitter.com/lUq7uPe1cG

What happened between Princess Beatrice and Charlotte?

Another sweet moment which fans spotted was between Charlotte and Princess Beatrice.

During yesterday’s service, the royals were seen singing a hymn as Charlotte turns around and spots Beatrice.

Princess Beatrice then spots Charlotte and they both grin at each other.

Fans loved the moment between the royals as one gushed: “This moment [is] absolutely everything. I love every small interaction between the kids and Bea.”

Another said: “Aw I have a feeling they have always had a lovely relationship!”

What did you think of the service? Head to our Facebook page @EntertainmentDailyFix and tell us.