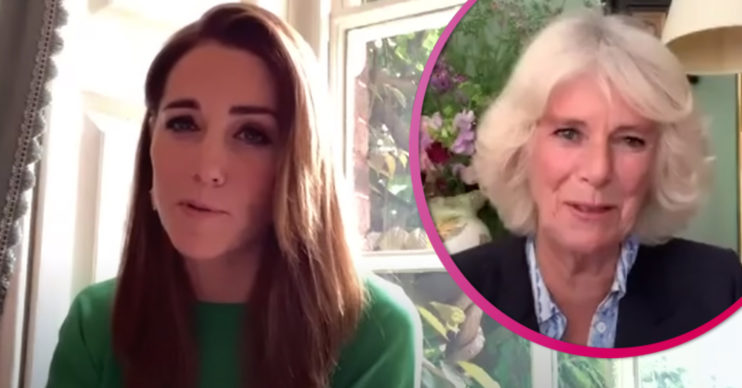 Camilla, Duchess of Cornwall, and Kate Middleton have teamed up for a joint engagement.

The pair appeared in a joint video call last Wednesday to mark Children’s Hospice Week (June 22 to 26 in the UK).

Camilla and the Duchess of Cambridge joined three of their respective children’s hospice patronages.

Children’s Hospice South West and Helen & Douglas House are two organisations Camilla has been patron of since 2014 and 2007 respectively.

What did they say during the video call?

Camilla said: “Thank you all for zooming in.

“I have to admit I was filled with a certain amount of trepidation because I wasn’t sure what I was going to find [at a children’s hospice].

“When I arrived I was totally amazed by what I found, the feeling of warmth and laughter and happiness.”

Kate went on to describe the work of children’s hospices as “extraordinary”.

The mum-of-three also spoke with Stuart and Carla Delf, and their 13-year-old son Stuie.

Last month, Stuie ran a sponsored 5K every day to remember his brother Fraser, nine, who died in January after living in an EACH hospice.

Fraser died from Coats plus syndrome, a condition which affects many organs in the body and causes brain abnormalities.

Stuie told Kate and Camilla he was inspired by Captain Tom Moore, who raised millions for the NHS.

Camilla told him: “Oh Captain Tom. Captain Tom has done a lot for this country, hasn’t he?

“He’s inspired so many people. You must be very fit, Stuie.”

“And, like you say, they consider the whole family as well, which is really important.”

Meanwhile, according to HELLO! magazine, Stuart said afterwards: “[The Duchess] said she was going to plant a sunflower in memory of Fraser.

“I’m not sure which EACH it’s going to be, but at one of the hospices.”

Fans were thrilled to see Kate and Camilla join together for an engagement.

One person said on Instagram: “Camilla and Kate are working together. I love to see this.”

Another wrote: “Love this combo, Katherine and Camilla.”

“It’s always obvious there is warmth and respect between them.”