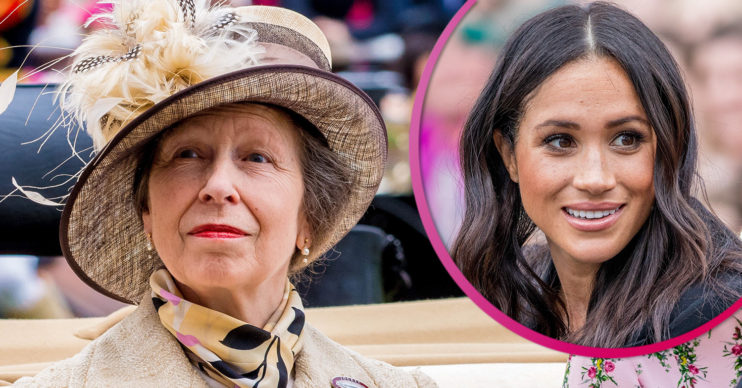 Lady C made the allegations in her latest YouTube video

Princess Anne had “concerns” about Meghan Markle and thought she was “unsuitable” for the royal family, Lady Colin Campbell has claimed.

Lady C claimed Anne did not think that Prince Harry should marry Meghan and thought “everybody who was going along with it was making a great mistake”.

In a 38-minute video shared to her YouTube channel, the socialite said the Princess Royal was the “champion” of “don’t marry that girl”.

What did Lady C say about Princess Anne and Meghan Markle?

Lady C said: “Who absolutely saw [Meghan] coming from a mile off was Princess Anne.

“She objected strongly as the relationship developed on several grounds all of which were based on conduct and character.

“Princess Anne objected to the fact that Meghan was a flagrant operator. She also thought Meghan was so flagrantly attention-seeking.”

What else did Lady C claim?

Lady C continued: “It just absolutely turned Princess Anne off because she couldn’t stand Meghan’s constant ‘uh, uh, me, me me, me.’

“Princess Anne was evidently horrified that [Meghan] stood a chance of becoming a member of her family.

She objected strongly as the relationship developed.

“She saw nothing but trouble down the line and she made it clear.”

Meanwhile, she added: “Princess Anne was the champion in terms of ‘don’t marry that girl, she is unsuitable.’

Lady C also claimed: “Princess Anne was rightly concerned that if the marriage proceeded and there were children, there would be huge problems.

In addition, Lady C claimed that Meghan “set out to charm” the family and “succeeded” with Prince Charles and the Queen.

However, she said the Duchess of Sussex didn’t succeed with “everyone else”.