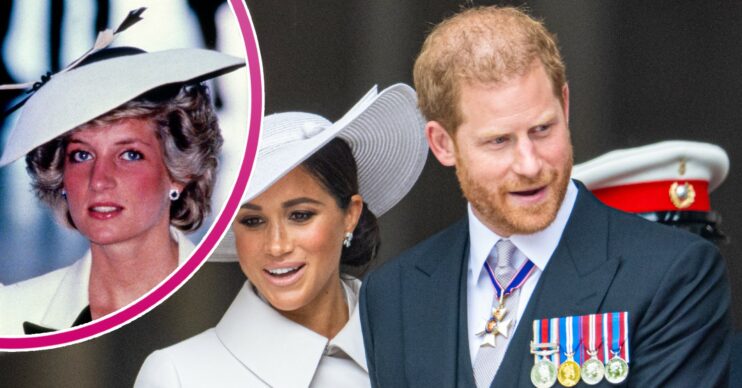 Prince Harry would have unlikely married Meghan Markle if his mother was still alive, the Queen‘s former aide Dickie Arbiter has claimed.

In an exclusive interview with GB News, the Queen’s former press secretary speculated on how Harry’s mother Princess Diana would have reacted to his royal conflict.

He went on to say that Harry’s bold decision to marry Meghan and leave the royal family would never had happened if Princess Diana was still here.

A couple of years after marrying Meghan, Prince Harry decided to leave the royal family for good in 2020.

The pair infamously opened up about their decision to leave in a controversial interview with legend Oprah Winfrey, after making some bold claims about the royal family.

However, the Queen’s former secretary, Dickie Arbiter, is convinced that Harry never would have married Meghan if his mum was still alive.

Talking with GB News, he said: “If Princess Diana was alive today we would not be going through this.

“She had her head screwed on the right way. She was very practical and he was very sensible.”

Mr Arbiter also claims that Harry wouldn’t have married Meghan if he wasn’t in the state he was in as a result of Diana’s death.

He said: “I’m going to stick my neck out here and I doubt Harry would have married Meghan because Harry wouldn’t have been in the state he was in as a result of his mother’s death.

“He would’ve taken a completely different course and he would still be here working in support of the Queen.”

The royal aide also commented on BBC’s apology for their infamous interview with Princess Diana.

The BBC recently apologised for allegedly deceiving Princess Diana into believing claims that the Prince of Wales had an affair with Harry and William’s former nanny Tiggy Legge Bourke.

Standing up for Diana and the Royal family, Mr Arbiter said: “It’s shameful that it has taken the BBC 27 years to give an apology to Tiggy Legge Bourke.

“And the fact that she had to go to court for it and expose some of her personal details. The whole thing is shameful.”