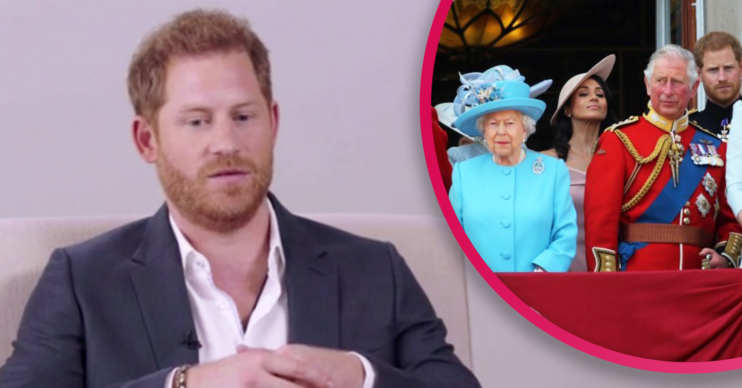 A new episode of The Me You Can't See has dropped

The latest Prince Harry The Me You Can’t See episode has dropped and, with it, a new “swipe” at his family.

Harry took part in a townhall-style show with Oprah Winfrey. In it, he discussed his Apple TV+ documentary series.

And, while mentioning no names, he did appear to allude to an “element of shame” felt by his family over his mental health struggles.

Harry also revealed how he dealt with wife Meghan Markle’s suicidal thoughts. He previously admitted that he was “somewhat ashamed” of his actions at the time.

Speaking to Oprah via video link, Harry spoke about his mental health struggles.

Read more: Prince Harry ‘could get a windfall’ in Prince Philip’s will

Earlier on in the series he said that he suffered “total neglect” at the hands of his family when he asked for help.

In the new show, Harry said: “As parents, as siblings, certainly from what I’ve learned – there’s an element of shame we feel.

Read more: Queen was ‘misled’ into signing off on Prince Harry’s documentary series

“Because we’re like: ‘How could we not have seen it?’ How did we not know? How did you not feel comfortable enough to come to me and share that with me?

As parents, as siblings, certainly from what I’ve learned – there’s an element of shame we feel.

So what did he say about Meghan?

In their original Oprah chat, Meghan admitted that she felt suicidal when heavily pregnant with son Archie.

She claimed that she asked the royal family for help and her pleas were ignored.

Just hours after she told her husband how she was feeling, they headed out to a royal engagement.

Harry has said he is “somewhat ashamed” of how he dealt with Meghan’s admission.

And now he’s spoken about dealing with someone who has suicidal thoughts to Oprah.

He said: “So many people are afraid of being on the receiving end of that conversation [from a suicidal person] because they don’t feel like they have the right tools to give the right advice.

“But what you want to say is you’re there.”

He added: “And listen, because listening and being part of that conversation is without doubt the best first step that you can take.”