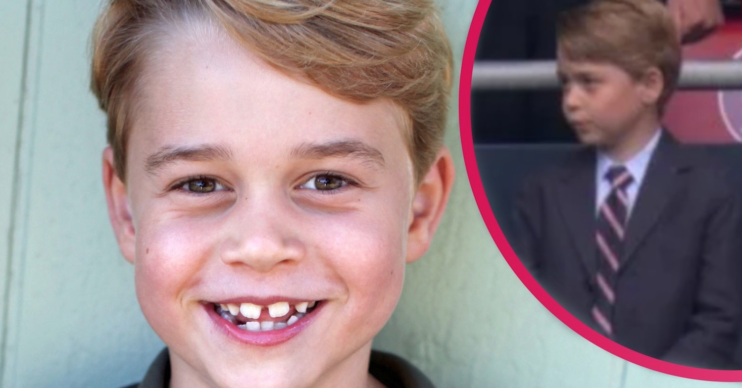 William and Kate will keep Prince George ‘out of the limelight’ after Wembley abuse, royal expert claims

He's been such a hit with royal fans

Prince George delighted fans during Euro 2020 with a cute, enthusiastic display cheering on England at Wembley.

However, a royal expert has claimed that his parents – Prince William and Kate Middleton – will keep the youngster ‘out of the limelight’.

This comes after George was submitted to abuse on social media.

What happened with Prince George at Wembley?

The now eight-year-old Prince appeared alongside his football-loving father and mother at the Euro 2020 final, where England played Italy.

George erupted in cheers and was seen smiling broadly after England took the lead.

During his visit, he looked very smart in a suit and tie.

However, appearing on the Australian breakfast TV show, Sunrise, expert and author Robert Jobson said: “Some were critical about him wearing a shirt and tie like his dad which I thought was very harsh.

“He has been very popular but I think they are going to try and keep him out of the limelight a little bit.

“[William and Kate] are very conscious of that.”

Scottish fans called the young Prince a “twerp” and invited him to “cry into his tie” when England finally lost the game on penalties.

Even ITV talkshow host Lorraine Kelly thought that wearing a suit and tie was excessive.

She said it was heartbreaking to see him go from excitement to disappointment during the course of the game.

“He was a wee cut down man, they had him in a suit and tie,” she said.

Charles Rae exclusively told ED!: “I think [William and Kate] will keep him out of the limelight while he is still young.

“But I doubt very much it has anything to do with the unjustifiable criticism he received.

“I mean who in their right mind attacks a young lad?”