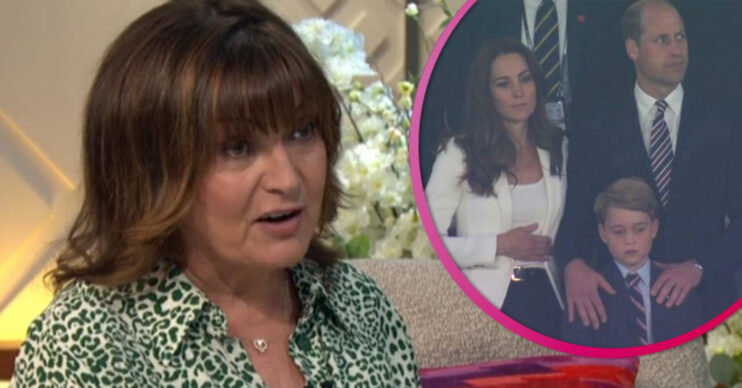 The young royal looked just like dad William in his suit

Prince George looked adorable at the Euro 2020 final as he wore a suit just like his dad Prince William.

But Lorraine Kelly said she thinks George, seven, should have been allowed to wear a football shirt.

The little boy attended the England vs Italy match alongside William and mum Kate Middleton.

What did Lorraine say about Prince George at the Euro final?

Lorraine said on her show on Monday: “One of the sights that I thought was hilarious was little Prince George.

“He was so excited and at the end he was absolutely gutted, the wee soul.”

She added: “He was a wee cut down man, they had him in a suit and tie.

Many people agreed with Lorraine, and shared their thoughts on George’s attire on Twitter.

One person said: “Seeing Prince George dressed in a suit instead of like, a football shirt, is so upsetting lol.”

Another wrote: “Can we please start a petition to let Prince George dress like a normal child? Why was he in a suit and tie and not a England t-shirt.”

However, the majority of fans thought George’s little suit was adorable and appropriate for the occasion.

One gushed: “Why do people get mad over a kid wearing a suit? Prince George was adorable in his suit.”

Another tweeted: “Can we all agree that Prince George looks bloody adorable in his little suit?”

One pointed out: “Actually, apparently Prince George asked to wear a suit just like his Dad. Numerous reports of this.”

Reports did suggest George had wanted to be like his dad William and wear a suit.

George had also worn a suit during England’s match against Germany in the quarter-final last month.

Royal expert Duncan Larcombe explained to OK! Magazine: “George idolises his dad. That’s why we saw him looking so smart in his suit – he really wanted to dress like William.”

Do you agree with Lorraine? Head to our Facebook page @EntertainmentDailyFix and tell us what you think.