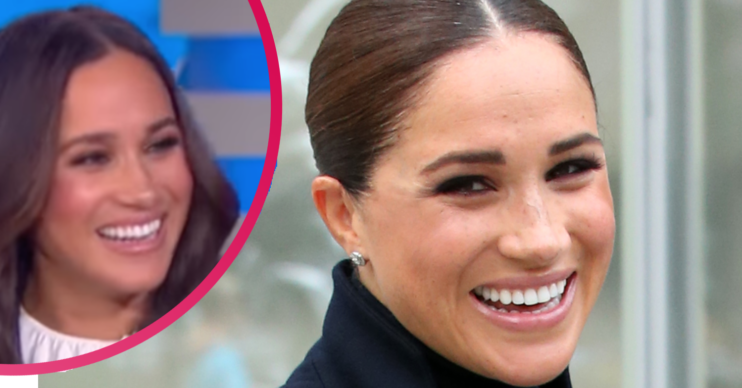 Meghan makes a surprise appearance on the Ellen Degeneres Show

Meghan Markle reveals a sweet milestone her and Prince Harry‘s daughter Lilibet has now reached in her Ellen interview.

The mum-of-two shared the news in an interview with Ellen Degeneres, which will air in the US today.

Read on to find out more about her interview.

What does Meghan reveal about baby Lilibet?

The Duchess of Sussex has been speaking to American chat show host Ellen for the Ellen Degeneres show.

That’s why I don’t have kids.

Meghan talks about how the return to the Warner Bros studio was ‘very different’ as she used to go there for acting auditions.

It is her first high-profile television interview since the bombshell Oprah Winfrey chat, which aired in March.

Meghan, also mum to Archie, two, appears in a preview clip for the episode.

She tells Ellen: “Lili’s now teething,” before adding she’s looking for something which will relieve the tot’s pain.

Ellen, who lives near Meghan and Harry in Montecito, California, jokes: “Tequilla, anything?”

“That’s Auntie Ellen for you,” Meghan replies, before Ellen adds: “That’s why I don’t have kids!”

The talk show host and comedian has known Meghan for a few years, after they met at a dog shelter in LA.

Ellen asks Meghan, 40, about a car she used to own to travel to auditions.

Meghan laughs as she says: “Yes, I used to own this very old car, a Ford Explorer, sport.

“At a certain point the key stopped working on the drivers side, so after auditions I would park at the back of the parking lot, open the trunk, crawl in and pull it shut before crawling over the seats.

Read more: Meghan Markle ‘will spark dread at palace’ with her Ellen interview

“That’s how I would come to and fro… it was not ideal.”

Meghan responds: “I would play it off, just looking for my highlighters for my script…and then climb in.”

Harry and Meghan welcomed Lilibet, who was named after the Queen, in June.

Wearing a striking red Carolina Herrera gown, Meghan was asked if she was proud of her husband.

Meanwhile, royal biographer Angela Levin has suggested that the palace will “dread everything” Meghan says during the Ellen interview.

What do you think of Meghan appearing on Ellen’s show? Let us know over on our Facebook page @EntertainmentDailyFix.