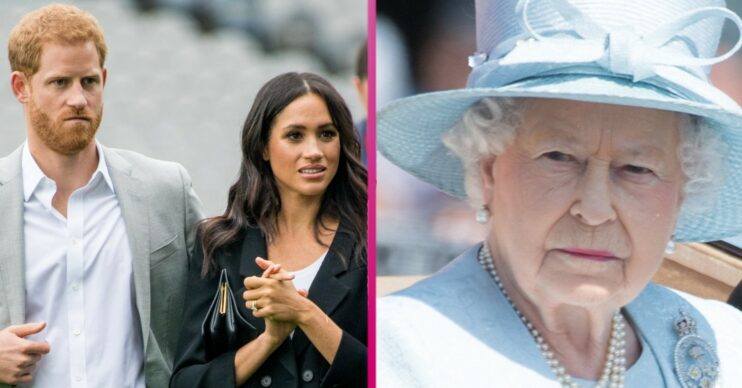 The duke and duchess will apparently stay in the US

Meghan Markle and Prince Harry have reportedly ‘snubbed’ the Queen’s Christmas invitation and won’t be visiting her over the holidays, despite the monarch’s ill health.

Prince Harry and Meghan, who were believed to be making the trip back to the UK for the holidays, have made a U-turn.

The royal couple have apparently ‘snubbed’ the Queen, and won’t be visiting her over the Christmas period.

What was said about Meghan and Harry ‘snubbing’ the Queen?

An invitation was reportedly sent to the couple to join the Royal family at Sandringham for Christmas.

Harry and Meghan, however, have apparently declined to attend.

One royal source told US publication Page Six: “There’s a lot that goes into the logistics and planning of the family Christmas, so of course, staff know that Harry and Meghan are not coming. If they were, they would have communicated it to their family by now.”

They went on to say: “But this is Her Majesty’s first Christmas without her husband, so one would have hoped they would want to be with her.”

Why did they ‘snub’ the Queen?

The reason why Harry and Meghan don’t want to attend is apparently due to the fact that they don’t want any unnecessary attention when they fly from their home in California to the UK.

“I think everyone understands there will be a frenzy when they come back to the UK,” the source continued. “But they need to rip the [Band-aid] off and get on with it.”

This news comes during a trying period for the Queen, whose health is a matter of public debate and scrutiny. Last month, the Queen spent the night in the hospital and was advised by her doctors to only take on ‘light work’.

What have the royals been up to recently?

The 95-year-old monarch missed the COP26 summit in Glasgow earlier this month, sending her son, Prince Charles, in her place.

On the day of last Sunday’s Remembrance Service at the Cenotaph, the Queen pulled out of attending. This was due to her having suffered a sprained back.

Again, Prince Charles took on her role in her absence.

However, yesterday (Wednesday 17 November) the Queen was pictured in an in-person engagement for the first time in close to a month. She welcomed General Nick Carter to Windsor Castle and was seen standing and smiling with him.

Meghan and Harry’s snub of the Queen has come during a time where Meghan is once more in the public spotlight.

The Duchess of Sussex recently sat down for an interview with Ellen Degeneres on the Ellen Show.

What do you think of Meghan and Harry’s snub? Leave us a comment on our Facebook page @EntertainmentDailyFix and let us know what you think.