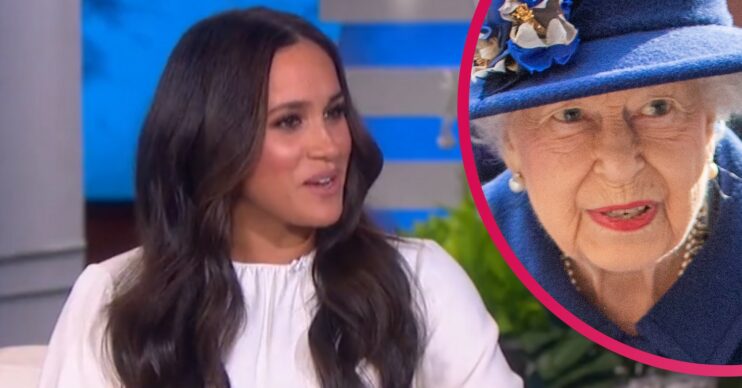 Meghan Markle ‘will spark dread at palace’ with her Ellen interview

The Duchess of Sussex's interview will air in the US today

Meghan Markle appearing on the Ellen Show will likely spark dread at the palace, a royal expert has claimed.

An expert says that the interview, due to air in the US today (November 18), will send shockwaves through the Royal Family.

Speaking to The Sun, royals writer Angela Levin slams Meghan, labelling her “ruthless” for doing the interview while the Queen‘s health remains a big concern.

Angela also pointed out the timing is remarkably similar to Meghan’s “tell-all” interview with Oprah Winfrey.

The expert, who wrote Harry: A Biography of a Prince, says: “I think the palace dread everything she says because she can be so rude.

“The interview with Oprah was bad timing. Prince Harry’s grandfather was ill. It is all about what is good to her. She’s ruthless and she thinks of herself first.”

The Queen cancelled her traditional visit to the Cenotaph for the Remembrance Service last Sunday, causing speculation about her health.

The official reason was that the 95-year-old monarch had sprained her back.

But coming so soon after a host of other missed appointments, Brits have begun to worry that Her Majesty’s health is in rapid decline.

Angela branded Meghan “desperate for publicity” for carrying out the interview with a question mark hanging over the Queen’s health.

In other royal news, Prince Charles gave an update on his mother’s health earlier this week.

The Prince of Wales is currently on a mini-tour of the Middle East with his wife Camilla, Duchess of Cornwall.

He spoke to media in Jordan, assuring them that the Queen is fine and just following doctors’ advice to rest.

When asked about the health of his mother, Prince Charles said: “She’s alright, thank you very much. Once you get to 95, it’s not quite as easy as it used to be.”

Charles turned 73 on Sunday November 14. That same day, he had been attending the Sunday Remembrance Service in place of the Queen.

Prince Charles attended with other key royals including The Duke and Duchess of Cambridge.

Royal fans were delighted to see the Queen up and about yesterday (Wednesday 17 November) when she made her first public appearance in almost a month.

Her Majesty was pictured smiling as she spoke to the chief of the defence staff.

She wore a green, orange and white floral dress for the occasion.