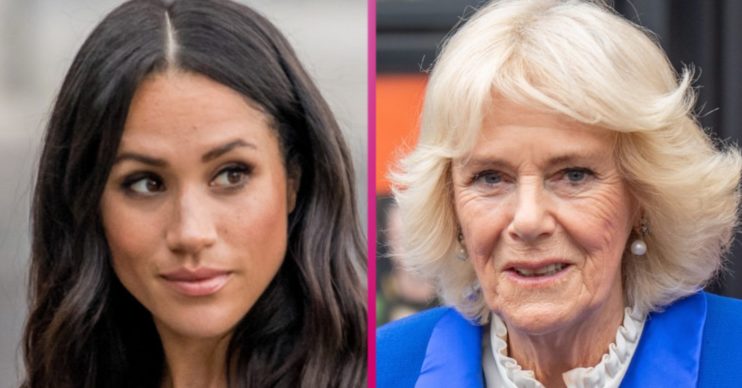 Meghan Markle didn’t pay attention to advice from Camilla, the Duchess of Cornwall, it has been claimed.

According to the Mail on Sunday, Camilla invited the now Duchess of Sussex to a private lunch before her May 2018 wedding to Prince Harry.

What did Camilla say to Meghan Markle?

An unnamed friend of Meghan’s told the newspaper she was “grateful” for the guidance.

The report claimed there was a level of empathy as Camilla understands how difficult the transition to royalty can be.

The source said: “Meg was really grateful to Camilla who was very supportive and invited her out for private lunches, particularly around the time of her marriage.

“She listened to her and understood that it’s really difficult joining the Royal Family from an otherwise ‘normal’ life.”

Nonetheless, insider reckons Meghan did not take the help to heart.

Camilla supporting the Duchess of Sussex

They continued: “She was very sensitive to Meghan and provided her with support, advising her to ride out the storm and that it would all pass — but ultimately Meghan didn’t listen.”

Instead, the perception is Meghan and Prince Harry have hit back at unflattering portrayals, rather than weather them.

An anonymous palace aide also told the Mail that Camilla made effort to be a ‘mentor’ before.

Previously, the Duchess of Cornwall also spent time with Kate Middleton for similar purposes, before she married Prince William.

She was very sensitive to Meghan and provided her with support, advising her to ride out the storm.

Meghan allegedly released images depicting her visit on the day Camilla was due to make a speech about domestic violence.

Read more: Queen will not return to Buckingham Palace for ‘foreseeable future’

The wife of Prince Charles was said to be “very upset” that Meghan chose to ‘overshadow’ her with the timing of the pictures’ distribution.

A source the the Mirror: “Camilla’s work is very important to her. Her decision to highlight the scourge of domestic violence at the 10th ­anniversary of Women of the World was a carefully thought-out plan.”

The insider added that “everyone was in agreement that Camilla’s speech should take p­recedence.

The source continued: “Unfortunately some people had other ideas.”

Apparently they have already pitched the show to NBC Universal.

A source told the Mirror: “It will home in on race issues, something Meghan has always been passionate about. It’s got quite a political stance and will also draw on feminism.

The same report states that they intend to run their own television production company.