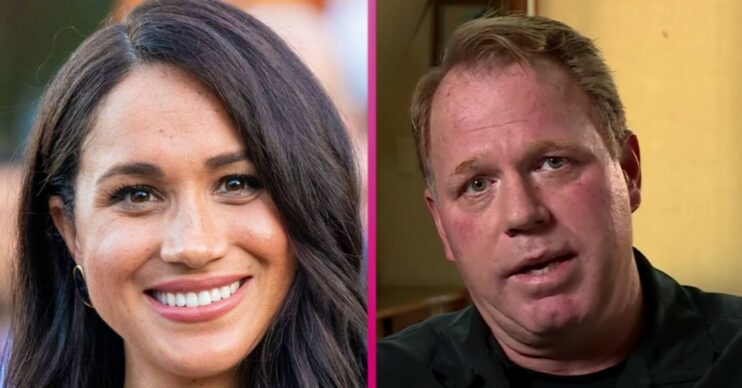 Thomas Markle Jr, the brother of Meghan Markle, has slammed his sister as his participation in Big Brother was confirmed.

The 55 year old will be a celebrity contestant on Big Brother VIP alongside Caitlyn Jenner when it airs later this year.

Meghan Markle news: What has her brother said?

Thomas Markle Jr claimed he warned Prince Harry about her in a trailer for the forthcoming reality series.

The clip shows him getting out a limo as fireworks shoot off and he enters the BB set.

Read more: Meghan Markle ‘ignored gift of flowers for her 40th from her dad Thomas Markle’

“I’m the biggest brother of them all.”

Thomas’ voiceover continues as he criticises his younger sibling.

She’s going to ruin your life.

It is claimed: “I told Prince Harry: ‘I think she’s going to ruin your life.’

Who is Thomas Markle Jr?

Thomas Jr is the only son of Thomas Markle.

He is Meghan’s older half-brother as they do not share the same mother.

However, both Thomas Jr and Meghan share an older sister in 56-year-old Samantha Markle.

What has he said before now?

Thomas Jr claimed he felt “disowned” by Meghan in an early 2020 interview with Australia’s Channel 7 News.

He said: “I don’t recognise this person any more and neither do the rest of the family.

“She is my sister and I’ve always loved her. We had a great upbringing, a really good childhood.

“I obviously wish her well and the best in life. But on the other hand I don’t believe in some of her actions, like disowning her family and saying we don’t exist.”

He also distanced himself from claims he wrote a letter to Prince Harry before he and Meghan married.

It was previously reported Thomas Jr said she is “jaded, shallow and conceited”.

However, he subsequently suggested those comments were made out of “frustration”.