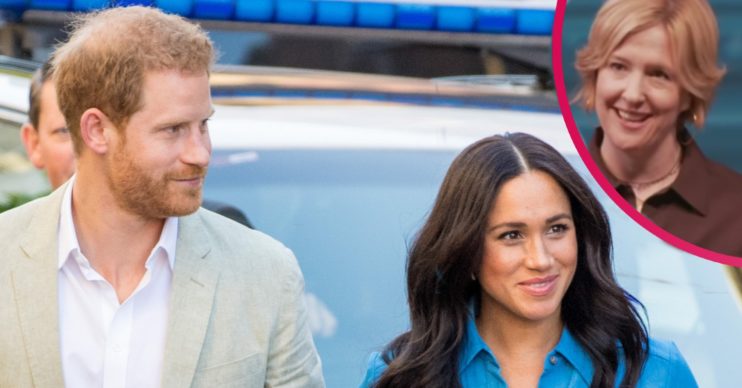 And they are fast fans, with Harry’s saying he ‘adores’ Brené’s  work.

Harry spoke on a video call with members of the Queen’s Commonwealth Trust last week with Meghan.

Here his face lit up when both Brené and Tristan Harris’ quotes were mentioned.

Harry said: “I love the fact you’re quoting Brené Brown and also quoting Tristan Harris because they are two people we absolutely adore as well, and we know.”

Meghan then laughed and agreed: “We love them!”

Tristan Harris is the President for Center for Humane Technology.

He is believed to have met Harry and Meghan earlier this year to discuss their new charity Archewell.

He has been dubbed “the conscience” of technology and encourages tech leaders to understand the potential dangers of the internet to society.

Brené is a bestselling self-help author and professor who has been viewed millions of times on her TedTalks.

She is also a close friend of Oprah Winfrey and credits Gwyneth Paltrow and Melinda Gates as confirmed fans of her works.

Her work is particularly well known for its focus on developing empathy for others as well as yourself.

She also lectures on vulnerability and advises her followers to let go of personal shame.

Harry continued in his video call to encourage personal vulnerability.

He said: “Five years ago, six years ago, talking about your mental health was a sign of weakness. Just as much as vulnerability was a form of weakness.

“If we’re all able to show our vulnerability that doesn’t mean you are weak, if anything I believe that shows mostly your strength.

“If you are so in-touch with your emotions that you know where you are on each day, well that’s a superpower.”

Meghan has long been a fan of Brené’s and even included an essay of hers in her September 2019 guest edited Vogue.

The essay “Speak Your Truth. Follow Your Wild Heart” examines online trolls and how she has combatted them over the years.