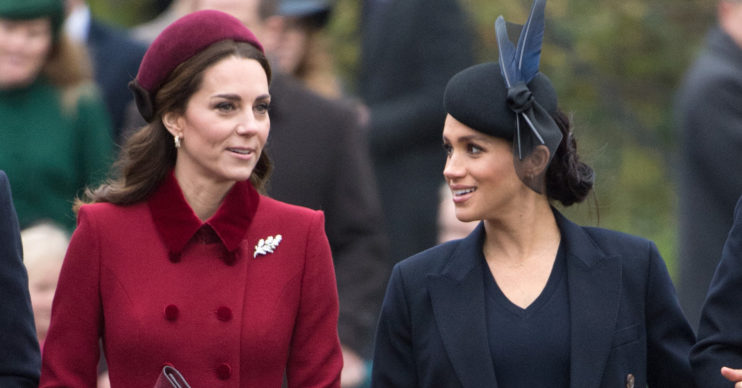 Meghan Markle and Kate Middleton ‘fell out over bridesmaids’ tights’

The cause behind the alleged rift between Meghan Markle and Kate Middleton has finally been ‘revealed’.

At the time of Meghan and Prince Harry’s 2018 wedding, it was reported that Meghan and Kate had fallen out.

Reports surfaced that Meghan had ‘made Kate cry’ over bridesmaids arrangements.

Read more: Meghan Markle ‘convinced there was a conspiracy against her’

A new report states that the pair fell out when they disagreed over tights for the bridesmaids.

“There was an incident”

At Kate and Prince William’s 2011 wedding each of their bridesmaids wore tights.

However, Meghan reportedly defied protocol and demanded each of the bridesmaids go bare-legged.

A friend (who remains anonymous) told Tatler magazine: “Then there was an incident at the wedding rehearsal.

“It was a hot day and apparently there was a row over whether the bridesmaids should wear tights or not.

“Kate, following protocol, felt that they should. Meghan didn’t want them to.”

Previously two sources told The Telegraph that the pair had argued over the bridesmaids’ outfits.

“Kate had only just given birth to Prince Louis and was feeling quite emotional.”

Since Meghan and Harry left the royal family in March of this year, Kate and William have been forced to step up their royal duties.

Her reported exhaustion was hinted at by Kate herself when she spoke to BBC Breakfast about home schooling duties.

She said: “The children have got such stamina I don’t know how.

“Honestly, you get to the end of the day and you write down the list of all the things that you’ve done in that day.

“So you pitch a tent, take the tent down again, cook, bake. You get to the end of the day – they have had a lovely time – but it is amazing how much you can cram into one day that’s for sure.”

What do you think of this alleged rift? Share your thoughts with us on our Facebook page @EntertainmentDailyFix.