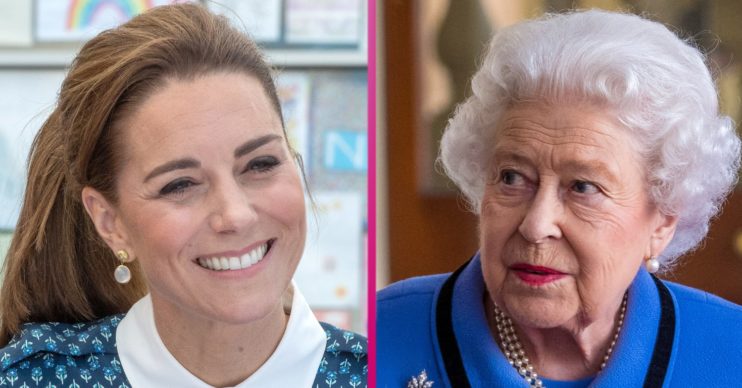 Kate Middleton ‘has been The Queen’s rock throughout the pandemic’

The Queen isolated during lockdown

Kate Middleton and The Queen are closer than ever this year, say royal insiders.

The Queen has reportedly relied on the Duchess of Cambridge for clarity and calm.

Here she self-isolated with Prince Philip for almost five months.

The royal insiders say both Kate and her grandson Prince William were there to help.

Although they couldn’t meet face to face, they reportedly stepped up their royal duties and also stayed closely in touch.

A source told US publication US Weekly: “These are strange times for everyone, senior royals included, and having Kate as her rock has made it so much easier for the Queen to adapt to her new life at Windsor.

“More than anything, knowing she can rely on Kate and Prince William to handle matters in her absence is the greatest comfort she could ask for.”

Kate Middleton is a ‘genius at keeping a level head’

What’s more, the insiders even says the pandemic has also brought William and Kate closer as a couple.

They said: “He’s relieved to have Kate to depend on and refers to her as his better half, their approach to everything is similar—they embody that ‘Keep calm and carry on’ mentality, choosing to focus on positives when things get tough….Kate’s a genius at stepping back, breathing deeply and then approaching any difficulty with a level head.”

The Queen and Philip are now at Balmoral.

It has widely been reported that William, Kate and their three children have joined them as of this weekend.

This year hasn’t just proven stressful for The Queen due to coronavirus but also due to various additional factors.

Prince Philip was in and out of hospital several times the year prior, making him highly vulnerable if he were to contract COVID-19.

And Prince Harry and Meghan Markle stepped down as senior royals this March.

Moving to America, it is not known when the Monarch shall be reunited with her grandson or great grandson Archie.

In addition, Prince Andrew, said to be The Queen’s favourite child, has stepped down from his public duties.

A former associate of convicted pedophile Jeffrey Epstein, he has fallen far from public grace.

Despite this all, Kate and William have maintained their royal duties throughout this challenging year.

Evidently devoted to their roles, they have continually attended royal engagements.