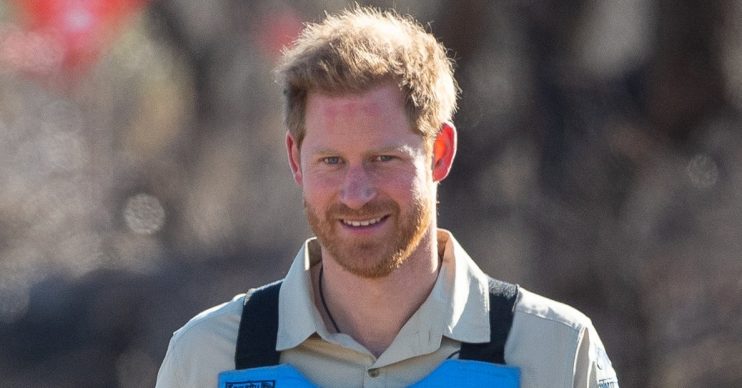 The Duke of Sussex has admitted he was “emotional” walking through a street in Angola that his late mum Princess Diana visited in 1997.

Harry, who was 12 when Diana died in a car crash in Paris in August 1997, is currently on tour in South Africa with his wife Meghan and their four-month-old son Archie.

On Friday, the duke visited the Angolan landmines and was pictured walking through a minefield, recreating the famous image of Diana taken in Africa just months before her death.

Harry was dressed in a beige shirt and black trousers as well as protective clothing as he walked through the street, which was once littered with red warning signs.

Over 20 years ago, Diana was pictured walking through the field filled with unexploded landmines.

Now two decades on, the street is made up of houses, schools, shops and a thriving community.

Speaking to reporters, Harry said: “It has been quite emotional retracing my mother’s steps 22 years on and to see the transformation that has taken place from an unsafe and desolate area into a vibrant community with local businesses and colleges.

“22 years ago, my mother visited Angola. There were still more than 1,000 minefields in this beautiful country which remained to be cleared.

“I wonder if she were still alive today, whether that would still be the case. I’m pretty sure she would have seen it through.”

Harry also took a moment to sit beneath a tree, which was planted in the town of Huambo and named after his late mother.

During his visit, Harry met with representatives from the three de-mining organisations working in Angola – the HALO Trust, Mines Advisory Group and Norwegian People’s Aid.

He also was asked to set an anti-personnel mine off with a controlled explosion to safely destroy the weapon.

Prince Harry says he believes his mother would have seen through clearing minefields in Angola and calls for landmines to be consigned to the history books.

The Duke of Sussex has walked through a minefield as Princess Diana famously did in 1997 http: // https://t.co/0dPUT1a7DD pic.twitter.com/oxaalv5Sa8

Harry visited the Huambo Orthopaedic Centre too, which he will rename after his mother.

A post shared to Harry and Meghan’s official Instagram page read: “The Duke of Sussex visited a de-mining site in Dirico, Angola, to raise awareness of the danger and prevalence of landmines that still exists today.

“In 1997 Diana Princess of Wales visited Huambo to bring global attention to the crisis of landmines.

“The Duke is humbled to be visiting a place and a community that was so special to his mother and to recognise her tireless mission as an advocate for all those she felt needed her voice the most, even if the issue was not universally popular.

In Angola today The Duke of Sussex has sought to continue his mother’s legacy and highlight the ongoing threat of landmines, 22 years after The Princess of Wales did the same. The Duke joined @thehalotrust on an ex-artillery base near Dirico and as they worked to clear the area for the local community. The Duke also took time today to welcome the Luengue-Luiana National Park as the newest member of the Queen’s Commonwealth Canopy – Her Majesty’s (@theroyalfamily) campaign to protect forests and plant millions of trees across the globe. These forests in Angola will help protect an ancient elephant migration route, and hopefully encourage the animals back to the region. Angola, once home to over 200,000 elephants before the country’s civil war, now has the potential to provide elephants with the largest home range remaining in Africa. Safe passages, or ‘elephant corridors’ will have to be created so they can return naturally, without danger to the communities or the lands themselves. The Duke has been involved in @queenscanopy projects in the UK, the Caribbean, New Zealand, Australia, Botswana, and Tonga, and firmly believes that protecting and planting trees is vital to look after the earth’s eco-system. #RoyalVisitAngola Video © SussexRoyal

Read more: Prince Harry leaves Meghan and Archie behind as he travels solo to Botswana

“During his visit today, The Duke will walk along the street which was once the minefield where his mother was famously pictured.”