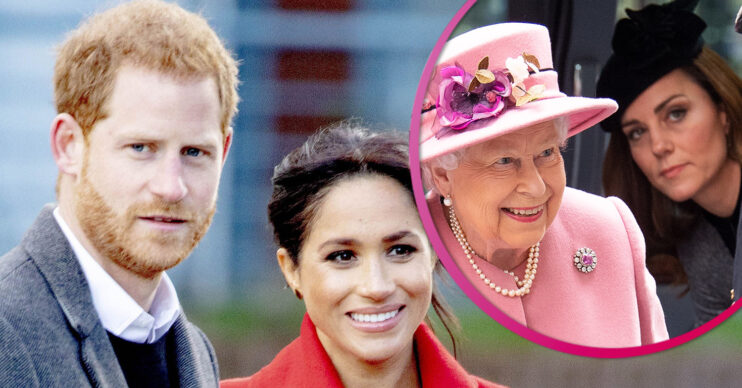 The movie is coming soon...

The Prince Harry and Meghan Markle Lifetime movie has released another trailer featuring the Queen, Kate Middleton and Prince William.

Harry and Meghan: Escaping the Palace will focus on the Duke and Duchess of Sussex‘s exit from their senior royal roles.

On Wednesday, Lifetime revealed a new glimpse of the film and it featured other members of the royal family.

The new video sees Harry, played by Jordan Dean, and Meghan, portrayed by Sydney Morton, speaking to the camera.

Harry first says: “I will do everything in my power to keep my wife and son safe.”

Then the trailer shows the first glimpse of Kate, who is played by Laura Mitchell.

Kate says: “This is the life we signed up for. Here we value dignity above all else.”

Sydney as Meghan continues: “I never thought this would be easy. But I wanted to make the Queen proud!”

William, played by Jordan Whalen, says: “Let everyone understand it. The monarchy is at stake!”

Then viewers get a glimpse of the Queen, who is played by Maggie Sullivun.

She declares: “The monarchy will always survive!”

The trailer ends with Meghan saying: “Have I made the world’s biggest mistake?!”

Royal fans had a very mixed reaction to the trailer, with some saying it was adding “fuel to the fire”.

One commented: “This shouldn’t have been produced. Talk about adding fuel to the fire.”

Another wrote: “Wow! This movie isn’t going to make things better for the two brothers! So sad!”

A third said: “I can not believe that Lifetime is going to air this stupid movie.”

However, others are looking forward to watching the film.

Another wrote: “Can’t wait to see this movie.”

Will you be watching the movie? Leave us a comment on our Facebook page @EntertainmentDailyFix and let us know.