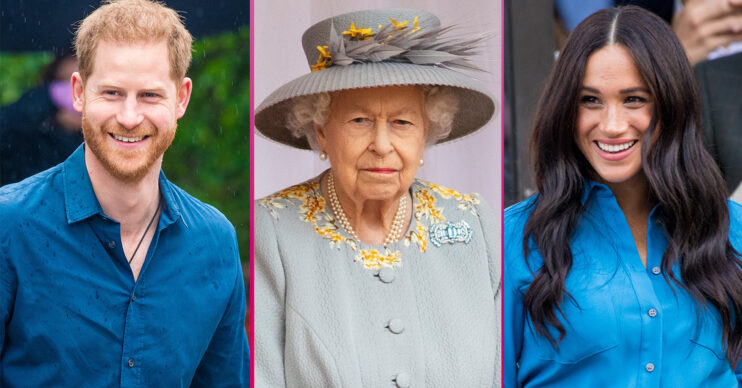 The event will take place next June

The Duke and Duchess of Sussex will apparently return to the UK next year for the event and they’ll bring their two children – Archie and Lilibet.

The couple have reportedly had a strained relationship with the royals since they stepped back from royal life last year and since their Oprah interview in March.

A source told Closer magazine: “They wouldn’t miss it for the world.

“Harry and Meghan are making a special trip from Los Angeles to London with Archie and Lilibet.”

This may be the first time Her Majesty, 95, gets to meet baby Lilibet Diana.

When will the couple return to the UK?

However, some reports have said Meghan and Harry could return to the UK in September for another memorial for Princess Diana.

Harry recently visited the UK to attend the unveiling of a Diana statue at Kensington Palace.

Harry and Meghan are making a special trip from Los Angeles to London with Archie and Lilibet.

He reunited with brother Prince William for the event, which became scaled down due to COVID-19 restrictions.

Royal expert Russell Myers said this week that Meghan and the kids may join Harry during the September visit.

He said on Lorraine: “There may be another bigger memorial for Princess Diana in the pipeline in September.

“And it has been rumoured that Harry may come over with the kids and with Meghan.”

Meanwhile, if Harry and Meghan attend the Queen’s Jubilee celebrations next year, they may not stand on the Buckingham Palace balcony with the rest of the family.

A source told the Mail on Sunday: “The Duke and Duchess of Sussex have been invited and I’m sure the Queen is very much looking forward to seeing them there.

“The balcony moment will be decided much nearer the time.

“But there’s a limit to how many family members should be on it, and I would have thought that working Royals who contribute to the family would be higher on the list than the Sussexes.”