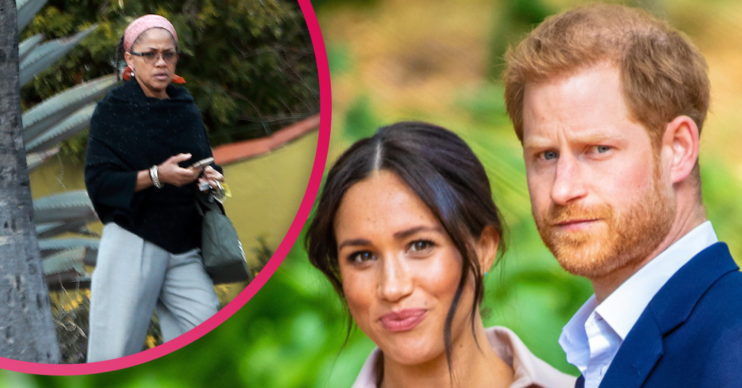 The yoga teacher, 63, has reportedly been living with Meghan, 38, and Harry, 35, since they relocated to Los Angeles.

And she is particularly enjoying lots of quality time with her grandson, Archie.

Meghan is Doria’s only child, and she has kept quite a low profile since Meghan came into the spotlight.

A yoga teacher and former social worker, she attended her daughter’s wedding at Windsor Castle.

However, she reportedly turned down an invition from the Queen to join the royal family for Christmas back in 2018.

They had previously been holed up in another mansion on Vancouver Island, Canada.

Tyler has allegedly lent them the house, while he remains at his additional house in Georgia.

The home is worth an estimated $18 million (£13.3 million) and is located above Beverly Hills.

The lockdown has forced the former royals to spend the majority of their time at the celebrated movie maker’s home since they relocated.

Bar a few dog walks and charity outings, they have rarely been seen.

Throughout the pandemic they have completed various video calls to both British and US charities.

During one such event, Harry and Meghan said that “uncomfortable” conversations were needed regarding the Commonwealth.

While addressing young leaders of the Queen’s Commonwealth Trust, Harry said: “When you look across the Commonwealth, there is no way that we can move forward unless we acknowledge the past.

“So many people have done such an incredible job of acknowledging the past and trying to right those wrongs, but I think we all acknowledge there is so much more still to do.