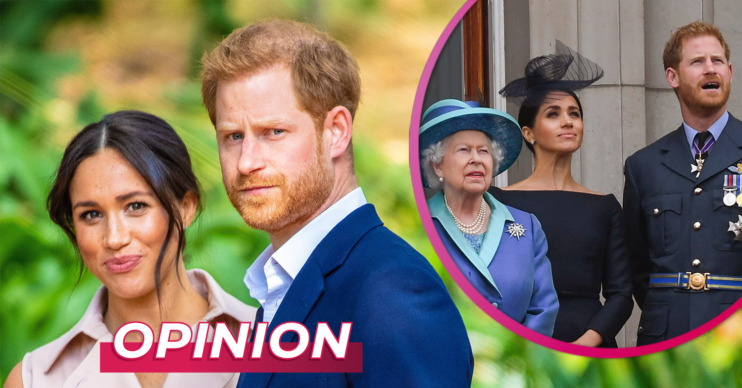 OPINION: ‘Meghan and Harry deserve a break and did the right thing stepping back from royal life’

They have been subjected to enough criticism

Meghan Markle and Prince Harry caused a huge controversy when they stepped back from the royal family, and they are still getting grief about it now.

But it’s time to say enough is enough to the haters.

The couple were subject to much criticism in their roles as senior royals so I for one could totally see why they made such a drastic decision.

At the time, they said they wanted to become “financially independent” and split their time between the UK and America.

To me, I think they were just ready to live a more peaceful life away from the spotlight. And given the amount of negativity thrown Meghan’s way, in particular, how could anyone truly blame them?

Everybody seemed to love Meghan and Harry when they announced their engagement in November 2017.

Ahead of their spring wedding, there was so much adoration and goodwill for the couple.

But since their nuptials, the pair have faced a lot of backlash over their actions.

They came under fire when their Frogmore Cottage renovations cost £2.4 million in public funds.

Meghan and Harry were also criticised heavily for taking private jets after preaching about the environment.

So, yes, some criticism was justified, but much of it was utterly uncalled for.

The couple are apparently paying back the renovation costs and earlier this year, they reportedly took commercial flights instead of using private jets.

Doesn’t that show they have taken criticism on board and are doing something about it?

A lot of the criticism was projected on Meghan, especially when she was pregnant with son Archie.

People were constantly comparing her to the Duchess of Cambridge.

Kate Middleton was praised for touching her baby bump, however, Meghan was shamed.

Meghan had to deal with a lot during her pregnancy and, indeed, during the lead-up to her wedding.

Several of her family members publicly criticised her and did public interviews about her, including her dad Thomas Markle.

I think many people couldn’t understand why the couple were so unhappy living a life of luxury and privilege.

Don’t get me wrong, looking from the outside, it’s hard to understand why they wouldn’t want all of that.

But I think after Meghan and Harry became parents, they just wanted to live a quieter life across the pond, to protect their little family. And I don’t see anything wrong with that.

Still, Meghan and Harry are hit with negative attention – and the current High Court battle between her and Associated Newspapers Ltd over the publication of a letter to her father, has fanned those flames.

But let’s look at all the good the couple have done both during their roles as senior royals and now working separately from the royal family.

The couple have been working with a string of charities and helping those vulnerable during the coronavirus pandemic.

They could just be sitting back enjoying the trappings of celebrity life, rubbing shoulders with the showbiz royalty of LA.

But instead, they have continued to do what they always promised – to do good and play their part in making the world a better place.

Let’s just give them the peace of mind and head space to get on with it!

What are you opinions on Meghan and Harry? Leave us a comment on our Facebook page @EntertainmentDailyFix and let us know.