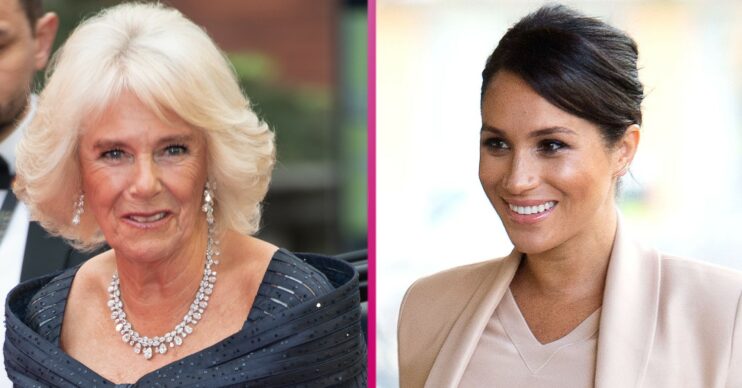 She reportedly wanted it before it was given to Meghan

Meghan Markle is reportedly being replaced by the Duchess of Cornwall in a theatre role she’s said to have eyed for a while.

The Duchess of Sussex previously held the post before relinquishing her titles as part of Megxit.

A March 2020 visit is thought to have been one of her and Prince Harry’s final engagements as working royals.

According to the broadsheet, the position is one Camilla had aspired to take on for a while.

Furthermore, a source told the newspaper she was “miffed” to miss out when Meghan was gifted the role.

Read more: What does Meghan Markle eat in a day as diet ‘revealed’?

They claimed: “[Camilla] really wanted it.

She was pretty miffed.

“She was pretty miffed when it went to Meghan, and will be all the more delighted to take it on now, after being disappointed not to get it first time round.”

But she has also previously spoken about her passion for theatre when she attended the Olivier Awards in October 2020.

Camilla stressed how important drama is for “cultural life” – and expressed hopes the theatre industry will recover following the pandemic.

She said at the time: “I believe in theatre. It’s the cornerstone of a fertile cultural life, a forum for debate and a powerful means of building community.

“Perhaps more importantly, those of us who believe in the theatre also believe in its resilience.

“I should like to thank those of you whose profession is in the theatre for your determination and flexibility.

“Please remain resilient. We need you, and we’ve missed you.”

The Times said Clarence House declined to comment on the claim.