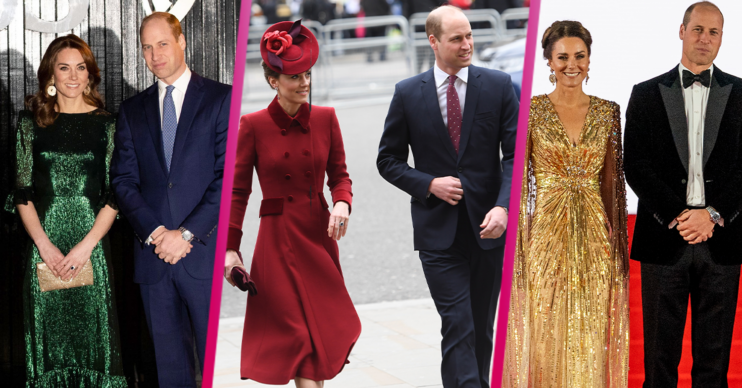 Are Kate Middleton and Prince William banned from holding hands when they’re out in public?

Meghan and Harry and Charles and Camilla do…

Kate Middleton looked stunning as she walked down the red carpet at the Bond premiere on the arm of her husband Prince William.

Except she wasn’t on his arm.

Or even holding his hand.

In fact, it’s a very rare occasion that we see the senior royals engaging in a public display of affection.

Well, ED! has all the answers here, so read on and see.

In fact, the Duchess of Cambridge looked positively embarrassed when the crowds at their 2011 wedding insisted they kiss on the Buckingham Palace balcony.

Read more: After that Bond premiere, the most dazzling red carpet dresses Kate Middleton has ever worn

While it isn’t official royal protocol that couples refrain from getting too close in public, it’s thought the Queen would prefer it.

Looking back at her life in the public eye with Prince Philip, the monarch rarely held her husband’s hand.

This set what royal etiquette expert Myka Meier called an “unwritten precedent for other royals”.

With William and Kate due to one day ascend the throne, it’s thought their future roles are in their minds when it comes to their decision on PDAs.

Therefore, it’s important for Will and Kate to follow protocol – and unofficial rules – closely.

By staying reserved in public, the couple have proven just how seriously they take their current duties – as well as their future roles as king and queen.

Royal PDAs are at the couples’ discretion

While we have seen William and Kate kiss and even cuddle at a handful of events over the years, experts say it all depends on the seriousness of the engagement they are at.

And it’s up to the couple themselves if they want to pack on the PDA or keep things professional.

Myka told People: “Senior members of the royal family would likely not be told how to interact or when they can or can not show PDA. They would be trusted to use their better judgement as to when it’s appropriate.

“The royals often adjust PDA to mirror the formality of the event they are attending. At a somber or more formal event, we are less likely to see PDA than at a casual event where it would be deemed more fitting.”

While it’s unusual to see Will and Kate holding hands in public, it’s not out of the ordinary for Charles and Camilla.

Myka added it’s “simply a matter of preference for each couple”.

There are also stark differences in behaviour depending on if the royals are on official duties or enjoying their own private time.

At the polo, for example, Will and Kate have been spotted being more tactile – and here they’re not on official royal business.

So why do Harry and Meghan pack on the PDA and not Will and Kate?

As for the Duke and Duchess of Sussex, because Harry was unlikely to ever be king, they’ve never been afraid to show the world just how in love they are.

Royal expert Robin Kermode explained that it’s “very clear” how close Will and Kate are.

And, Robin added, they don’t “feel the need to prove their love”.

He said: “It is very clear that William and Kate are emotionally close. However, they do not seem to feel the need to prove their love – particularly when on official state business.

“They come across as a strong, independent couple. And, while they are always on show, they do not feel the need to show their love for each other to the world.”