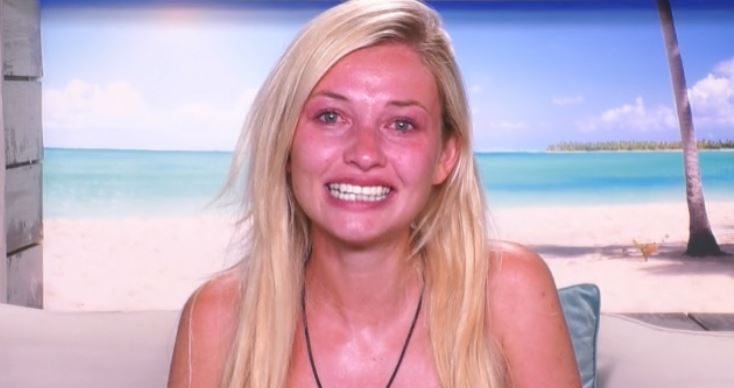 Amy's departure was aired in full

Amy Hart has been snapped for the first time since her shock departure from Love Island – and fans think she looks happier already.

The air hostess, 27, made the decision to leave the villa on Monday, with her emotional exit aired in full during last night’s (July 9) episode.

Earlier today, broadcaster and model Laura Whitmore shared a pic of herself with Amy at the airport as the Sussex lass returned home from Majorca.

Laura, whose partner is Scottish comedian and Love Island narrator Iain Stirling, captioned the photo: “Bumped into Amy at the airport and she is just a sweetheart!”

Bumped into Amy at the airport and she is just a sweetheart! ❤️

Amy was pictured beaming next to Laura, with her blonde hair looking a few shades lighter than it did during her final scenes on the show.

Fans in the comments heaped praise on Amy and pointed out how happy she looks now that she’s left.

One said: “She looks happier already.”

Another wrote: “She looks really happy, good on her.”

A third commented: “Awe, great to see her smiling.”

“How different does she look in that photo?!” wrote a fourth and another follower replied, “My god, so different! Happy though.”

Someone else said: “How different does she look!!!!”

Last night’s Love Island might have been one of the most emotional pieces of TV in a while, if viewers’ reactions are anything to go by.

Amy told fellow islander Curtis Pritchard, 23, that she was leaving the villa to give him a chance at meeting someone else and being “happy”.

The pair had been saved by their fellow contestants only the night before, but Amy took Curtis to the villa’s secluded terrace to reveal her decision, leaving the ballroom dancer in floods of tears.

She said that while she still loved Curtis, neither of them would be able to move on if she stayed.

Curtis began to sob and begged Amy: “Do not leave this place, please.”

But her mind was made up and the two of them gathered the islanders around the fire pit.

Explaining her decision, Amy told the other contestants: “When you love someone, you have to let them go.”

What did you think of Amy’s departure from the villa? Leave us a comment on our Facebook page @EntertainmentDailyFix and let us know.