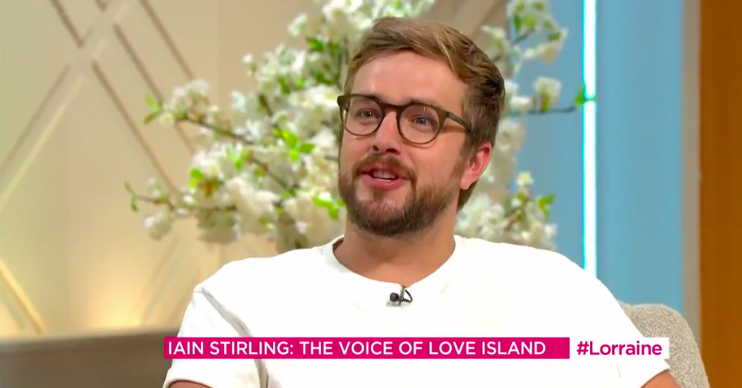 The comedian was very giggly on Lorraine

For those of us already missing Love Island since its Monday night final, DON’T WORRY, because ITV producers are working on a winter version.

And now presenter and voiceover guy Iain Stirling has opened up about the “exciting” new series, hinting that it could be even bigger than the summer version.

The Scottish comedian appeared on ITV’s Lorraine on Friday morning, and stand-in host Christine Lampard questioned the TV star about the new show.

She asked 31-year-old Iain: “There’s another Love Island coming in January?” and he confirmed the news, saying: “Yes! In South Africa! It’s gonna be exciting, right?”

Iain went on to explain why he’s more excited about the colder version, saying: “Because I always find with the summer Love Island, obviously you want to watch it in the summer but you’ve got, like, festivals to go to, and holidays and stuff.

Christine laughed: “Which is where you’ll be?” as Iain admitted he didn’t know if he’d join contestants for filming, saying: “Well, who knows? Who knows where I’ll be. I might be behind a bush in Luton on a remote connection. You don’t know.”

The hilarious TV star could be hoping to stay in the UK, as he also admitted how much he misses his girlfriend, Laura Whitmore while he’s away for months, filming.

#loveisland – completed it mate. On an unrelated note if anyone knows a good way of treating bags under your eyes, hit me up yeah.

He joked about re-coupling with his girlfriend of two years, and then backtracked, saying: “I’ll re-couple up with… nobody because I need you in my life.”

Christine asked if the model and TV presenter is a dedicated viewer of the dating show and he replied: “Maybe not every night because it’s quite the commitment, but she definitely watches it every now and again.”

The mum-of-one pointed out: “It’s probably the only way she gets to hear you because you’re away so much of the summer.” But he disagreed, saying: “She doesn’t like that voice, she likes my normal voice. She’s like, ‘Don’t do the voice. Stop doing the voice all the time.'”

2 years with my best mate x

Weeeeeeeee! We’re so excited about this new version. But it’s hard to imagine seeing all those bikinis while we’re huddled up next to our radiators.

Will you be watching the winter version? Leave us a comment on our Facebook page @EntertainmentDailyFix and let us know what you think.