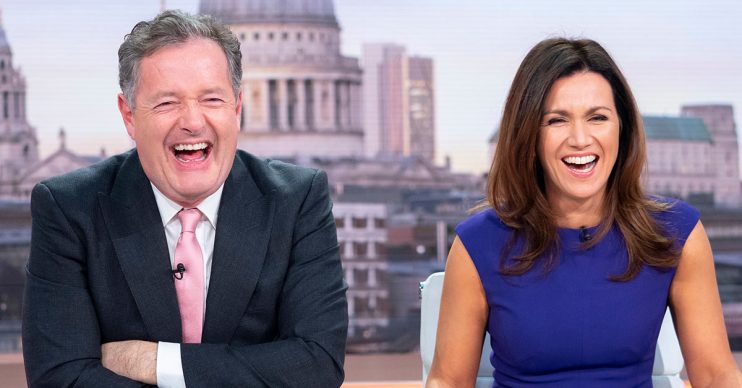 Do you miss him?

As Piers Morgan enjoys the sunny golf courses of Los Angeles on his summer break, his Good Morning Britain fans are longing for him to return.

Piers and his co-host Susanna Reid left fans gutted last month, when they revealed they would be taking the summer holidays off and wouldn’t be returning until September 2.

While Piers assured his very vocal fans that they’d be in the capable hands of Charlotte Hawkins and co, some feared the show would be “boring” without him.

Others, however, vowed to start watching again in his absence!

And, not even halfway through the six weeks, viewers have spoken again – with some begging the former tabloid journalist to return!

De-mob happy… last day of @gmb for us until September 2. Try not to miss us too much.

Read more: GMB fans outraged as woman claims dogs are ‘not capable of loving their owners back’

A combination of hosts – including Charlotte, Ben Shephard, Kate Garraway, Adil Ray and Ranvir Singh – have all been steering the morning show in Piers’ absence.

But some fans have slammed it as “car crash”.

One tweeted: “Piers, get yourself back to GMB asap. It’s become an absolute car crash since you went on holiday #noexcuses.”

#GMB when @piersmorgan and @susannareid100 back? These 2 are giving me a headache

#GMB @piersmorgan Get your self back to @GMB asap. Its become an Absolute car crash since you went on holiday. #noexcuses

@GMB Absolutely dire on every level,unbelievable that they have no better holiday cover,i’ve switched off today.They need an urgent rethink.

Dreadful, nothing worth watching at the moment.

A third sighed: “GMB when are @piersmorgan and @susannareid100 back? These two are giving me a headache.”

“Yes please,” agreed one more. “It’s a[bleep]-show. Peter Andre’s been the only bright spark. The rest are trying too hard and are just not entertaining.”

While yet another seethed: “Absolutely dire on every level. Can’t believe they have no better holiday cover. I’ve switched off today, they need an urgent rethink.”

However, not everyone agreed, with one even suggesting the presenter doesn’t come back at all!

He tweeted: “I demand he be fired for his behaviour over the past year. He brings his personal feelings and hatred to work and, therefore, creates a hostile work environment for those who don’t agree with his bigotry.”

This morning (Friday August 2), Charlotte was left emotional as she interviewed a police officer with Motor Neurone Disease, the same illness her father died from.

The presenter dissolved into tears when she spoke to ASS Chief Constable Chris Johnson and his wife Sharon about his battle with the terminal illness.

Charlotte’s dad passed away in 2015 at the age of 78, three years after his diagnosis.

As she listened to Sharon speaking about her husband dealing with the illness, Charlotte started crying.

She sobbed: “Sorry you are better than me, it’s making me really upset. But you are the ones going through it at the moment.”

Last month, Charlotte revealed her dad had died just a month after her daughter Ella Rose was born.

The star said on Lorraine: “He died a month before Ella Rose was born, I’ve got to be thankful that I was able to tell him I was pregnant at last.

“She knows all about grandad Frank. When we go on holiday, she waves to him out of the plane, she thinks he lives in the sky because he’s in heaven. He’s living on through her.”

Do you miss Piers Morgan? Leave us a comment on our Facebook page @EntertainmentDailyFix and let us know what you think of this story.