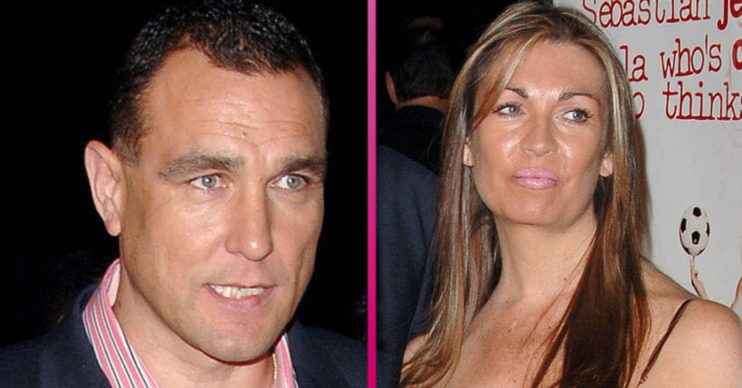 The former footballer says he experienced something strange but deeply moving on the night Tanya passed.

Vinnie Jones says he experienced something quite extraordinary on the night his wife passed.

The footballer turned actor, 55, lost his wife, Tanya, 53, in July of last year to cancer.

Both Vinnie and Tanya were diagnosed with melanoma in 2013.

Vinnie Jones says he was visited by a white light

In his new memoir, Lost Without You: Loving and Losing Tanya, he describes a supernatural visit from her.

He writes that on the night she died, he saw an unexplainable white light over his California home.

He explains: “The night Tans died we were all sitting outside in the back garden of our Los Angeles home Greenleaf. It was around midnight, a still, overcast night, no moonlight.

“One by one people were heading inside to bed, and I told them I’d be in in a little while. I wanted to smoke and watch the darkness and be alone.

Vinnie would blow kisses to his wife

“As I sat there, I noticed above me a white light. I knew it couldn’t be a star because of the cloud cover, but there it was.

“I already knew that when you lose someone you can start to look for things, for signs, so I was on guard – I never believed in any of that stuff and I wasn’t about to start now.

“But that white light was there, and there was no denying it. It definitely wasn’t a star and it wasn’t a helicopter or a plane – it was too low.

“In my grief and desperation I said to the light: ‘Is that you, babe?'”

He says it would be ‘impossible’ to remarry

Then wanting proof that is was definitely her – he blew and ‘threw’ her a kiss.

And stunningly, the light seemed to react.

He continued: “I thought about all the times she’d say, ‘Where’s my kiss?” and I’d throw her one to catch. So that’s what I did, right there in that dark garden.

“Suddenly, the light swerved, and dipped, and hovered, and then it flew – zoom!”

He told Piers: “I think that’s an impossible question to answer but if you asked me if I would get married again that would be an impossibility, she wouldn’t want that.

“There won’t be another marriage Piers I can tell you that.

“It was the perfect one and done for me.”