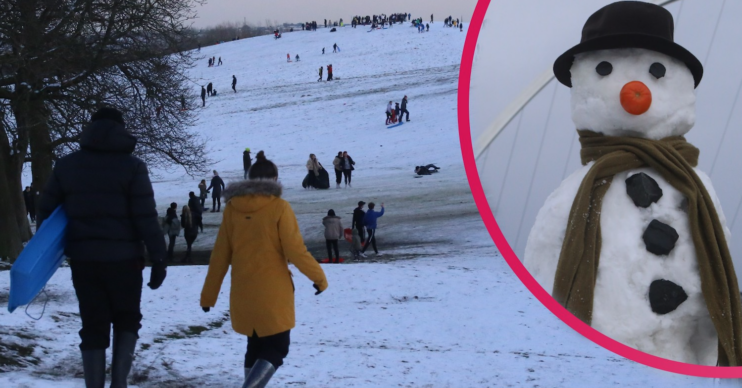 Get ready for the white stuff

The UK weather will bring with it a ‘snowbomb’ next month, potentially covering Britain in up to 11 inches of the white stuff.

Weather forecasts say that winter will be in full effect after the mild New Year’s Eve and see the first month of 2022 hit with snow.

What will the UK weather do in January?

The so-called ‘snowbomb’ will occur thanks to a new storm moving in from the Atlantic.

Forecasts predict that by the middle of next month, the UK will be transformed into a winter wonderland.

And that’s means snow. Potentially lots of it.

Weather site WX Charts predicts that by Thursday January 13, some parts of the UK will experience snow.

Most likely to be hit are areas in the north of the country as well as Wales and Northern Ireland.

The Sun newspaper says that up to 11 inches could fall in Scotland and Northumberland.

The Met Office, meanwhile, confirms that there could be snow towards the middle of January.

In its forecast up to January 13, it says: “Some wintry showers with snow to fairly low levels is possible in the north with cloud and rain clearing to drier and brighter conditions further south.

And then in the forecast from January 14 onwards, it says: “Temperatures are overall expected to remain slightly above average as a result of mild spells and shorter-lived colder periods.

“These shorter-lived colder periods may still allow for some snow but this will typically fall over hills in the north.”

Another record to fall on New Year’s Eve?

The news comes as the UK will experience milder-than-usual temperatures to see in the New Year.

While some parts of the country experienced a white Christmas, New Year’s Eve is expected to be a much warmer affair.

In fact, it could be one of the warmest on record.

Read more: New Year’s Eve could be ‘warmest on record’ after freezing temperatures across Christmas

A Met Office spokesperson told The Sun newspaper: “It’s going to be exceptionally mild in the coming days and could be as high as 15C on New Year’s Eve.

“If that’s the case, then another record will fall.”