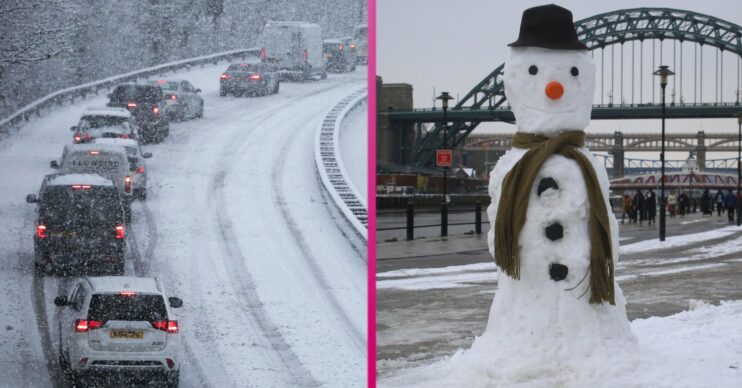 Snow forecast UK: It WILL be a white Christmas for some Brits on December 25, weather experts confirm

The snow forecast for the UK indicates it will be a white Christmas on December 25, according to the Met Office.

Heavier snow is tipped for the end of December.

But Christmas Day is predicted to be a crisp winter day in parts of Britain, with sunshine and snow showers.

Snow forecast in the UK for Christmas: Will snow fall on December 25?

According to reports, colder air will push south from Christmas Eve, bringing winds and a covering of snow in the north of England.

Storm Corrie will also see temperatures fall, indicating hill snow is likely in the south, too.

Areas like the Midlands and north Wales could also be blanketed by Christmas Day.

And by the evening of Christmas Day, parts of the north east, West Yorkshire and the north west could see snow, too.

Conditions are expected to be milder on Christmas Eve on Thursday, with rainfall.

But “colder and clearer” conditions will set in on Christmas Day. And the north will reportedly most likely see snow.

Other reports indicate “heavy snow” will reach the south coast on the day after Boxing Day.

That could see freezing temperatures predominate in the UK in the approach to the New Year.

However, according to BBC Weather, Boxing Day should see rain clear the south.

Meanwhile, bookies reckon Edinburgh and Leeds are the joint favourite places in the UK to receive snow.

William Hill priced both cities at 4/9 to see a white Christmas. Newcastle, Birmingham and Manchester have odds of 10/11 for similar.

We’re now seeing forecasters slowly warming to the idea of a white Christmas.

A William Hill spokesperson said: “As ironic as this may sound, we’re now seeing forecasters slowly warming to the idea of a white Christmas.

Read more: Millions of workers will be affected by the new sick note rules due to Covid – here’s how and why

“As soon as we ticked into the crucial five-day window of being able to forecast snow, those calling snow on the big day got a bit louder and as a consequence punters have been indulging in a festive flurry flutter with renewed confidence.”