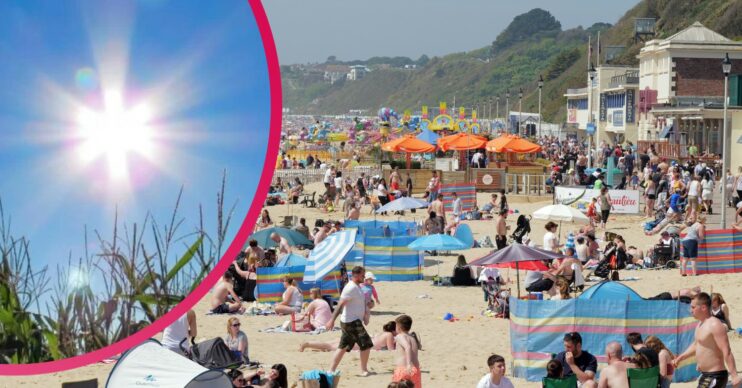 Make sure you take care in the sun!

UK weather forecasts of up to 31C this weekend has resulted in a heat health alert being issued.

Public Health England has advised Brits to take precautions against being affected by the hot temperatures – and look out for others, too.

The warning comes as Sunday is predicted to be the hottest day of the year. The weekend is also expected to be the warmest of 2021 so far.

Saturday will be very warm indeed, with long spells of sunshine across the UK.

However, Sunday will be even hotter. And the heatwave is expected to continue until Tuesday.

Why the heatwave will be such a scorcher

The Met Office added that many areas of the UK could reach heatwave criteria in the next few days.

The Met Office’s Andy Page said: “The extension of the Azores high is the principal reason behind the UK’s current weather pattern, which will see much of the UK reach heatwave thresholds over the weekend and into early next week.

“High temperatures will remain in the forecast well into next week. There’s a risk of isolated heavy showers in the south of the UK on Monday and Tuesday. But it should be largely fine for most areas.”

Here’s a look at the maximum #temperatures 👇 pic.twitter.com/0yUHlX3RP3

Dr Owen Landeg of PHE advises that people should employ common sense when dealing with the heat.

However, he said older people, those with underlying health conditions and young children are vulnerable.

“That’s why we’re urging everyone to keep an eye on those you know who may be at risk,” he said.

Dr Landeg continued: “If you’re able, ask if your friends, family or neighbours need any support. Also take water with you when travelling and keep up to date with weather forecasts.

“It’s also worth remembering the practical steps to keep homes cool during the day as this can aid sleeping at night and give the body time to recover from the heat.”

With temperatures rising through the weekend 🌡️ and #Heatwave conditions likely in some parts of the UK ☀️, here are some tips on keeping cool in hot weather 👇https://t.co/7OE5AKThlS pic.twitter.com/kxmI1ydJmf

The weather will cool a little from Wednesday. And there could also be thunderstorms on the horizon.

The previous hottest day for UK weather in 2021 was June 14. Temperatures hit 29.7C in London.