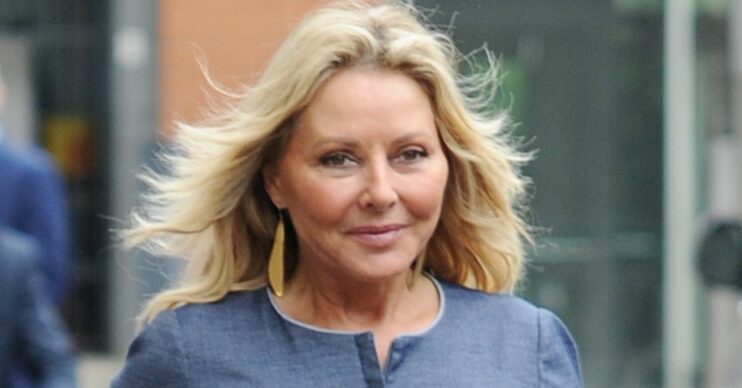 Is this Carol's hottest snap ever?!

Carol Vorderman has stunned her followers on Twitter after posing in a cheeky crop top.

The former Loose Women anchor, 60, left little to the imagination as she worked on her laptop in Wales.

Proudly showing off her roots, Carol modelled a Welsh Rugby Union sports bra in the post.

Carol was also seen working away from the idyllic holiday home.

Alongside the shot, she wrote: “It’s lovely working from home here #Wales but also lovely lazing around chillin.

“So hot in the sun today so just chillin @WelshRugbyUnion @oddballs ….#NeverWantToLeave.”

However, fans were seemingly distracted by Carol’s risqué pose.

Taking to the comments, one wrote: “Looks absolutely incredible on you Carol.”

Another shared: “Lovely view… and the sea in the background too.”

A third gushed: “Wow like a fine wine getting better with age!”

A fourth said: “What a gorgeous view. And the distant scenery is lovely too.”

Meanwhile, another accused Carol of “teasing” her loyal followers.

You’re being a tease Miss V!

They added: “Stop it! You’re being a tease Miss V.”

Carol is currently on a break in Wales with her close friends.

Earlier this week, the former Countdown host was spotted paddleboarding for the first time.

For the occasion, Carol donned a skin-tight wet suit as she perfected the water sport.

“We kicked off at 7am… high tide in the harbour #Wales #Warm #WithMyMates… went around the headland… just the most perfect piece of paradise.”

Is Carol single? Who has she dated?

Earlier this year, Carol revealed she was ready to date again.

The Welsh beauty, who turned 60 last year, has been single for over a decade.

She previously split with her ex-boyfriend, Des Kelly, in 2007.

Since then, Carol has remained single and doesn’t plan to jump into marriage anytime soon.

Opening up to The Telegraph, she said: “I’m single and, yes, I am dating. Would I marry again? Honestly, I just can’t see it.

“I am always on the move and I have a pretty low boredom threshold. My happiness doesn’t depend on being part of a couple, I know that.”