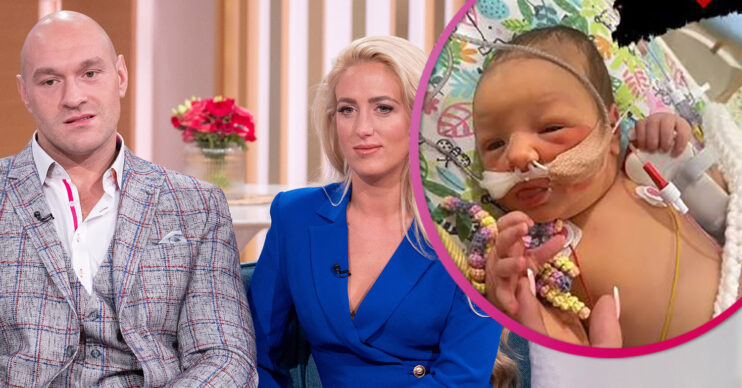 Athena was born at the weekend

The baby daughter of Tyson Fury and wife Paris reportedly”died for three minutes” during her intensive care ordeal.

The boxer and wife Paris welcomed their baby girl on Sunday but the tot has been in intensive care at a hospital in Liverpool.

Tyson’s father John opened up about Athena’s health during an interview with BT Sport.

John said: “It’s been a bit of a white knuckle ride, we’ve had a lot to deal with.

“But we’ve come out on the other side due to professionalism of Alder Hey Hospital in Liverpool, they’re the best children’s hospital in the country if not the world.”

He continued: “They’ve been really magnificent, they’ve really saved her life because she was dead for three minutes and they brought her back.

“It’s onwards and upwards from today.

“We thought at one stage we were going to lose her.

“But it’s all been good due to the professionalism of the doctors and the surgeons.

“Whoever works there is an amazing person and we’re so grateful to have them.”

Meanwhile, Tyson has been keeping his followers on Instagram updated on Athena’s condition.

He recently said on Instagram: “Update for everyone. Baby Athena is doing well and has had a stable day off ventilator.

“Thanks to everyone for the prayers, still in ICU for now.”

He added: “Thanks to all the DRs and nurses. God bless you all.”

Earlier this week, Tyson asked fans to keep his baby daughter “in your prayers” as she was taken back to intensive care.

He wrote on Instagram: “Thanks for all the messages and support. The baby is in a stable position and doing well. Hopefully she comes out of ICU today.

Meanwhile, previously announcing the birth of Athena, Tyson said: “Please can everyone pray for my baby girl who was born this morning.