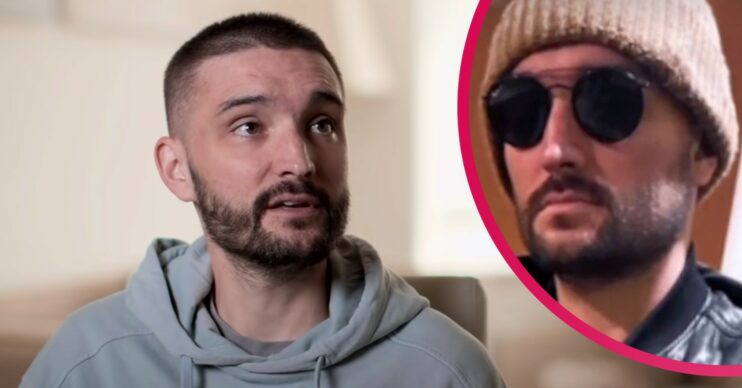 The Wanted singer Tom Parker is making use of a wheelchair as he continues his battle against cancer.

Tom, 33, was pictured resting in the chair on the Instagram account of his The Wanted bandmate Max George.

But despite his ongoing treatment for an inoperable brain tumour, Tom maintained a star aura by flashing a peace sign as he wore a leather jacket and shades.

The upload was soundtracked by an excerpt from Justin Timberlake’s SexyBack.

Read more: Tom Parker returns from cancer treatment as he reunites with kids in sweet moment

It also contained a fond caption from caring Max expressing his pride for his friend, saying: “I mean… come on.”

After the gig, Max revealed he and Tom were apparently bunking down together in the same digs.

Spinning around his hotel room as Max recorded a selfie of thanks to fans in the East Midlands, Tom could be spied in the room’s large bed.

He also shared a post on Instagram joking that he and Tom would be enjoying a cuddle together.

Now for a spoon.

“Nottingham, you were unbelievable!” Max captioned the snap.

“So much love in one room. Now for a spoon. @tomparkerofficial you smashed it tonight!”

Tom was unable to make the first dates of the tour in Glasgow, Newcastle and Leeds at the start of the month as he was in Spain.

But he did appear alongside Max and other bandmates Jay McGuinness, Siva Kaneswaran and Nathan Sykes earlier this week in Bournemouth.

Read more: Tom Parker’s wife ‘called on angels’ days before he pulled out of gigs

“The love you both have for each other is fire, love you boys so much,” one follower wrote.

Another added: “So proud of you all! Tom really is incredible.”

And a third reflected: “Tom looked so happy tonight! It has made me happy!”

“Keep on fighting my lovely,” said another fan.