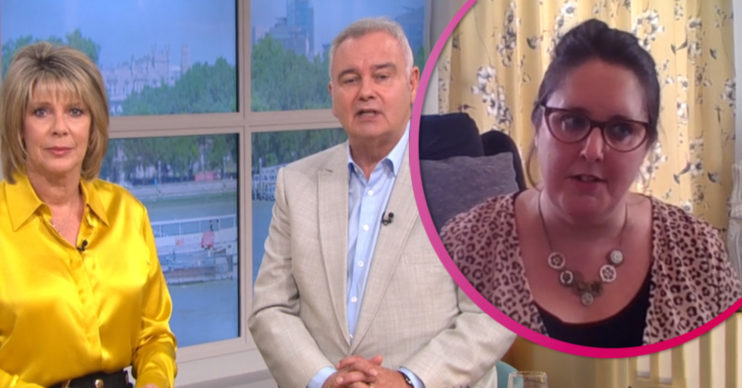 They're angry that their name is now associated with 'racist' memes

This Morning guests who are all named Karen have appeared on the show to demand their names back.

The female name Karen is now associated with a slew of popular memes that often insinuate racism.

Karen Masters, from Oxfordshire, says she has started a petition on Change.org.

The petition asks the public to stop using the name with negative connotations.

Karens hit back on This Morning

Karen said to hosts Eamonn Holmes and Ruth Langsford: “I just noticed a few memes and TikToks going on.

“It started off being quite funny if I’m honest.

“When the Black Lives Matter protests started and there was a lot of media putting Karens as racist.

“It took on a life of its own. I feel that we now as Karens can’t talk how this is affecting us because we are told we are entitled if we do this.

I think you should describe racist people as racist and not use our name.

“So I set up the Change.org to show that actually this is not fair for us to have to put up with this.

“We’re labelled as racist, entitled, anti-maskers and we’re just not that type of person and it’s just totally unfair!

Justice for Karens across the world?

“We want the media and the tabloids and the papers to stop using our name to describe racist people.

“I think you should describe racist people as racist and not use our name.”

Karen Trigg, from Gloucestershire, told the This Morning hosts that she was so distraught over the negativity surrounding her name – that she plans to legally change it.

She explained: “I can take a joke but it’s got to the point where it’s racist. I just want to nip it in the bud and stop it from effectively [ruining my life].”

She has set up a Facebook group dedicated to defending the name Karen.

She said on This Morning: “We don’t want to take away from [Black Lives Matter or] any cause but we don’t want our name to be used.”

However, some ITV viewers don’t appear to be very sympathetic.

Several took to Twitter to mock their pledges, and others argued that the world has more important issues going on right now.

Should Karens just take the memes ‘as a joke’?

One disgruntled viewer tweeted: “These people should grow up. Get a life. The Karen who said she may change her name DON’T. Your name is Karen be PROUD, if someone says your name is Karen say (YES AND) believe me they want know what to say.”

Another argued: “Lol this is a joke. Women of colour have been called mocking racist names all of their lives, yet I don’t see these women sticking up for them.”

But dozens of others appeared to defend these unhappy Karens.

One user urged: “Absolutely disgusting, Karen’s a lovely name, just ignore these idiots got nothing better to do than be spiteful, it was Sharon a few years back, didn’t bother me one bit, don’t let these people get you down your so much better than that.”

And a further user defended the name with: “I absolutely hate this let’s attack Karen rubbish. My absolute favourite human outside my family is a Karen she is like my work mammy. She is so kind warm lovely amazing and a fabulous nurse too. Back off Karens.”

Who’s side are you on? Tell us what you think about angry Karens on our Facebook page @EntertainmentDailyFix.